Is Canada heading into a recession? This is what you need to know

Is Canada heading into a recession? This is what you need to know

As gas prices and food costs continue to escalate and another interest rate hike is expected next month, many Canadians are wondering if a recession is coming and how to prepare for a possible economic downturn.

Sixty-eight per cent of Canadians believe the country is heading towards a recession, while 17 per cent believe it has already arrived, according to a new survey from Yahoo Canada/Maru Public Opinion released earlier this week.

However, 15 per cent of Canadians believe the concern about a recession happening now or later is exaggerated.

But if a recession were to occur, what does that mean for Canadians and how should they prepare for it?

WHAT IS A RECESSION?

A recession can simply be defined as a sustained decline in economic activity for at least six months. This could result from a decline in consumer spending, which in turn could cause sales to drop, businesses to cut costs and ultimately more layoffs. 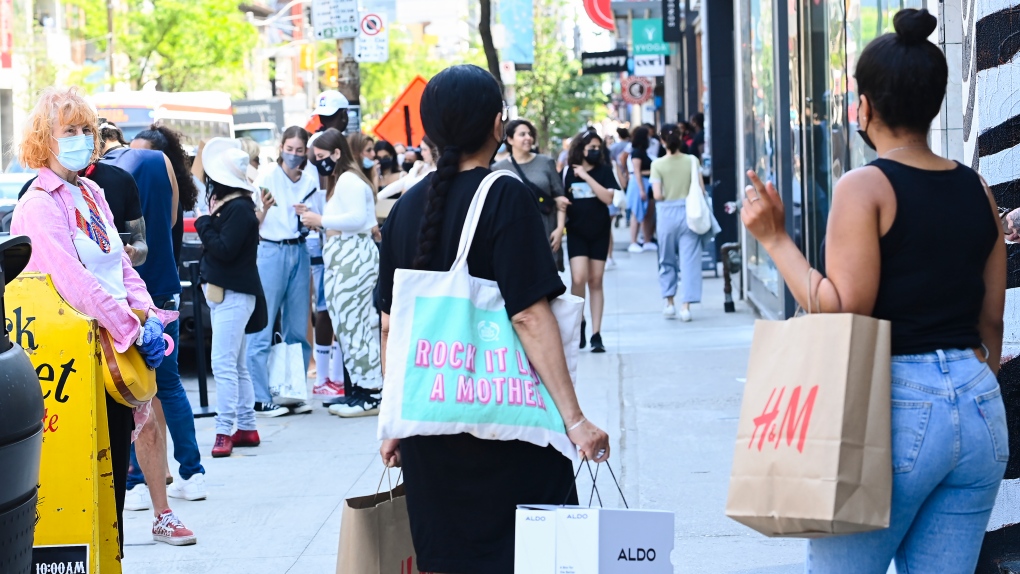 People shop and wait in long lines to enter stores along Queen Street West during the COVID-19 pandemic in downtown Toronto on Friday, June 11, 2021. THE CANADIAN PRESS/Nathan Denette

“So we tend to refer to gross domestic product (GDP) as being that overall measure of activity. If we have two straight quarters of decline that passes the simple litmus test of recession.”

The country’s last recession was in 2020 during the height of the COVID-19 pandemic.

IS THERE A RECESSION COMING?

With inflation at a nearly 40-year high and the Bank of Canada expected to raise its key interest rate next month, these factors could kick start another recession.

Statistics Canada said its consumer price index in May rose 7.7 per cent compared with a year ago, the fastest pace since January 1983.

“It's not an oil price issue or food price issue, it’s widespread inflation across the economy, that tells us and that tells policymakers the economy has just been running too hot for too long. We have an inflation issue rooted in the psychology of Canadians and among businesses, and it's going to have to be dealt with,” BMO Senior Economist Robert Kavcic told CP24. 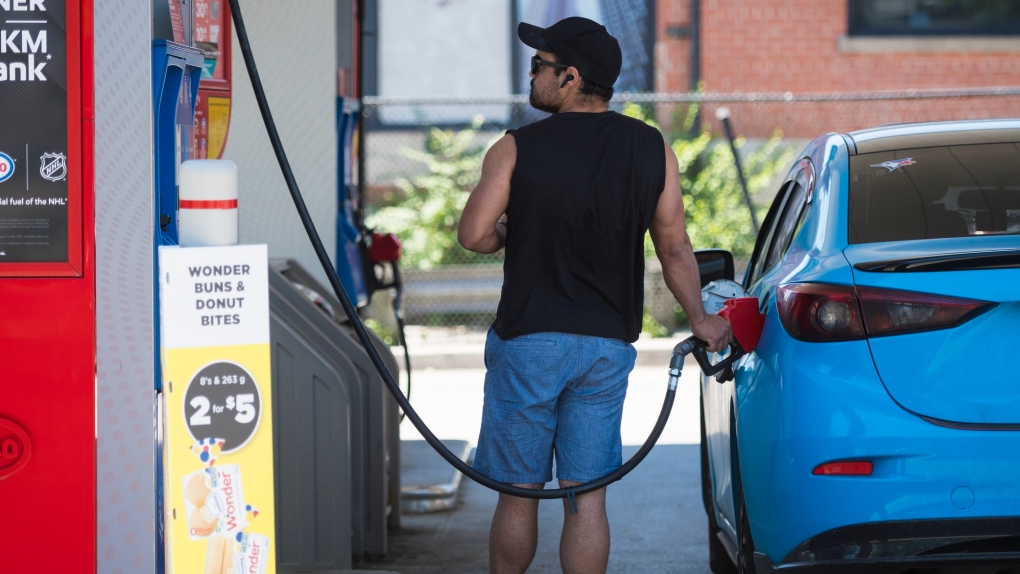 A commuter pumps gas into their vehicle at a Esso gas station in Toronto on Tuesday, June 15, 2021. THE CANADIAN PRESS/ Tijana Martin

The Bank of Canada has said that Russia's invasion of Ukraine, COVID-19 lockdowns in China and backlogged supply chains are fuelling “uncertainty” and higher prices for energy and food, prompting a need to increase interest rates to control inflation.

The central bank has hiked its key interest rate three times so far this year to bring it to 1.5 per cent.

But many economists, including Burleton and Kavcic, expect the central bank to raise its key rate once again by at least three quarters of a point next month to mirror the U.S. Federal Reserve’s recent interest rate hike.

Burleton said this hike could dampen consumer spending, which in turn could eventually ignite a recession.

“I mean as rates go up, the bigger the chance that economic activity will weaken next year but the Bank of Canada feels from a longer-term perspective if they can bring inflation down to their target that will serve Canadians the best over the medium to longer run. So unfortunately, it's going to come at the cost of some output foregone over the next four to six quarters,” Burleton said.

BMO is not forecasting a recession but Kavcic said if “sticky price pressures” continue and the central bank has to continue raising rates then it will be a “big pill for the economy to swallow.”

“Our view on this is that we're going to see economic growth really stall out through the latter stages of this year and the first half or so of next year.”

TD Bank is also not predicting a recession but said in its quarterly economic forecast that “there is a very thin margin for error if another shock hits economies.”

Burleton noted that Canadians are currently experiencing an unusual recovery after the recession in 2020 and that nothing “is a given at this stage.”

“The economy has shown me real resilience. We saw it with the April retail spending numbers. Our own high-frequency data internally…still shows resilience through May. So the economy is holding up in the first half. I guess the question is, to what extent it softens going forward.”

Burleton added that although risks are rising, he thinks a recession does not seem imminent.

HOW TO PREPARE FOR A RECESSION

In anticipation of a possible recession, 56 per cent of the respondents from Maru Public Opinion’s survey said they have set stricter priorities and reduced their spending in the past month. 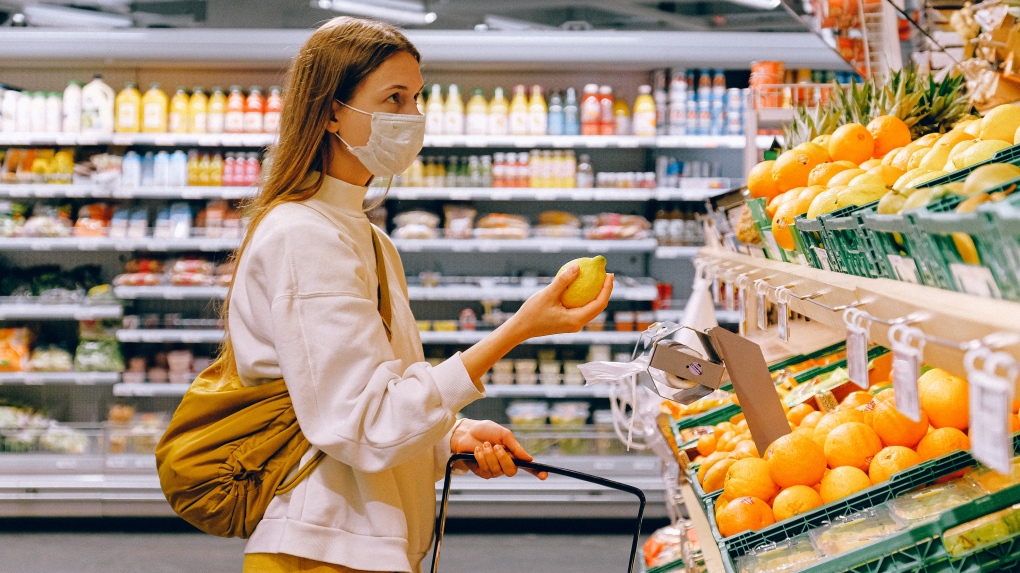 A woman wearing a mask is seen grocery shopping in this file photo. (Anna Shvets/Pexels)

Burleton said it’s a smart move to put away additional savings in preparation of a potential recession.

“It's probably not a bad thing to kind of start thinking about ways to protect yourself as a household in the event (of a recession). I think the good news is that based on aggregate data of the Canadian economy, a lot of households are holding on to additional deposits and savings…and we're counting on some of that cushion to help defend against deeper outcomes in the economy going forward.”

Sixty-three per cent of survey respondents said food is the biggest expense that they have cut down on in the past month, followed by entertainment and clothing and footwear.

The Yahoo Canada/Maru Public Opinion survey was conducted between June 17 and 19 among a random selection of 1,515 Canadian adults who are Maru Voice Canada panelists. The survey has an estimated margin of error of +/- 2.5 per cent, 19 times out of 20.

Salman Rushdie remained hospitalized Saturday after suffering serious injuries in a stabbing attack as praise poured in for him from the West but he was disparaged in Iran.

Ukraine's health minister has accused Russian authorities of committing a crime against humanity by blocking access to affordable medicines in areas its forces have occupied since invading the country 5 1/2 months ago.