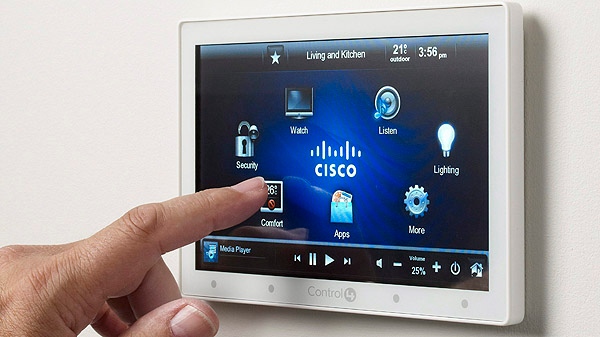 A touchscreen panel is shown installed at Tridel's Reve condominium in Toronto. Residents at some new condo developments in Toronto are becoming enthusiastic guinea pigs for a new brand of high-tech home that is fully automated and controlled by an iPad. (THE CANADIAN PRESS)

TORONTO - Residents at some new condo developments in Toronto will be guinea pigs for a new type of high-tech lifestyle in which their home is controlled by an iPad.

The lights are programmed to automatically come on when they step in the door and their favourite music plays throughout the condo. Or they can remotely have everything ready for when they get home by tapping into an app that can turn everything on and off from anywhere in the world -- via the Internet. The thermostat can be adjusted from work so the temperature is just right when they arrive home, or they can use the same app from bed to crank up the A/C or heat. And when sitting down to watch TV or a movie, a single tap of a button automatically starts a sequence that dims the lights, has the curtains close themselves and kicks their home entertainment system into gear.

"Toronto's very, very competitive when it comes to the condominium field so clearly we would like to have things that add value to the home purchase," said Jim Ritchie, senior vice-president of sales and marketing for Tridel, Canada's largest residential condominium developer.

The company partnered with Cisco to create a one-of-a-kind penthouse suite -- which is selling for almost $800,000 -- in one of its new Toronto buildings, called Reve, just outside the city's downtown core. It's decked out with all the latest high-tech bells and whistles and Tridel will see how potential buyers respond to those cutting-edge extras and consider them for future developments.

All the features can be controlled by iPad or iPhone and with one of the touchscreen panels mounted in the unit.

"I think the consumers are going to like what they see here," Ritchie said.

"It's going to allow us to get feedback from consumers in terms of what they like and really want, and things they wouldn't have any use for at all."

The two companies also struck a deal for Cisco to completely wire one of Tridel's next Toronto buildings so it can offer high-speed Internet access and other high-tech features to residents.

"It really stems from the idea that everyone is carrying more and more technology around with them and becoming more accustomed to using technology to be more productive and change our experience and everything we do," said Rick Huijbregts, vice-president of Cisco's Smart+Connected Communities division.

"We're really looking at new and innovative ways to deploy technologies in a way that doesn't feel in your face but it becomes part of the design and part of the space."

Across town, builder Urbancorp is promoting three developments in Toronto's east end that are being sold with an iPad and a similar high-tech setup as standard features for each unit.

"Because technology right now is improving day to day we wanted to be part of that and make it a convenience for the homeowners," said Urbancorp's director of development Ann Lam.

Consumers can get their own smart-home setup installed, although it's a lot easier and cheaper if the work is done during construction, said Greg Scott of Phand Corporation, which is currently doing similar work on a number of luxury townhouses in Oakville, Ont.

While there's a lot of new wireless technology available, a well-designed system runs a lot better if it's connected by wires hidden behind walls, Scott said. Some options -- like in-ceiling or in-wall speakers -- require that wires be run, which can be a messy job in a finished home.

The company has been installing automated home systems for years and has seen the technology associated with it evolve. But the release of the iPad in 2010 really sparked a wave of change, Scott said.

"The iPad changed things dramatically. There were things like (on-wall) touch screens before, but then the iPad came out at a cheaper price point, and everybody's familiar with it, so that kinda changed the direction for a lot of companies."

Ritchie said there probably isn't huge demand for these features today, but he believes that will change. He points to how the industry quickly started embracing environmentally friendly features, even though the demand wasn't there just a few years ago.

"In 2004 and 2005 I can tell you people were not coming into our showrooms asking for green, they didn't know anything about it, so we just demonstrated it and brought those products in. There was very little pickup in terms of people buying ... but they liked it," he said.

"People are now demanding it."