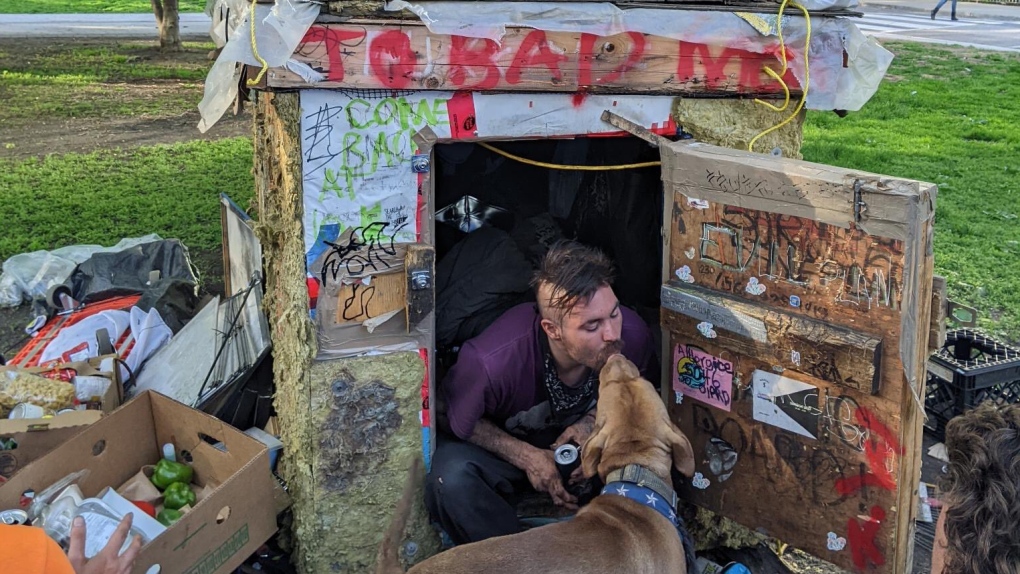 An Indigenous man living in what is assumed to be Toronto’s last “tiny shelter” in a downtown park says police have acted unfairly in their effort to remove and arrest him.

Over the past two weeks, Jordn Geldart-Hautala says he’s been subject to surveillance, harassment and intimidation, along with being barred from using proper facilities while officers are  present at his shelter in Clarence Square Park – all stemming from warrant issued over a minor charge in 2017 that has since been dropped.

“I have been suffering abuse from police for the last [two weeks],” Geldart Hautala said at a press conference Wednesday.

Toronto police have denied these claims and told CTV News Toronto they’ve offered assistance to the man and are acting on the outstanding warrant.

The structure that Geldart-Hautala lives in is known as “a tiny shelter” – the last one left in use in the city, both he and advocates say.

“Tiny shelters” refer to wooden structures built by carpenter Khaleel Seivwright for the downtown Toronto homeless community. Seivwright began building them in winter 2020 in an effort to provide safe outdoor shelter -- they were intended to keep occupants comfortable in temperatures as low as -20C

By Feb. 2021, the city was officially seeking to end construction of the shelters, citing bylaws and safety concerns, and filed an injuction against Seivwright, who settled and halted production.

Meanwhile, Geldart-Hautala has been living in his tiny shelter on and off for two years. He says he’s there to provide support to other homeless people residing in the park and is the keeper of a sacred fire – a tradition practiced among many Indigenous cultures.

“Trying to live is a struggle,” Geldart-Hautala said. “That's why I’m here to help other people in my position get into better places.”

Parkdale Encampment Support Network, a community-led housing advocacy group, said Geldart-Hautala has made the park into a “refuge” for not only other homeless people, but all surrounding neighbours.

On May 9, Geldart-Hautala said he was notified by police he would be placed under arrest if he left his shelter.

When reached for comment, Toronto police pointed to a warrant issued for Geldart-Hautala's arrest stemming from a charge over breach of conditions placed nearly five years ago.

On Wednesday, Sima Atri, lawyer at the Community Justice Collective and legal representation for Geldart-Hautala, confirmed to CTV News Toronto Thursday the charge has since been dropped.

Atri confirms the warrant was valid, but with the initial charge now dropped, she questions how that can still be the case. She says the warrant should now be nullified.

When asked about the charges being dropped, Toronto police said they could not speak for other jurisdictions and that they would not comment further.

Instead, officers were met by Geldart-Haultala and a crowd of supporters at 6 a.m., gathered at the park to hold a press conference and confront the force.

Supporters present at the park said that officers attempted to speak to Geldart-Hautala upon arrival and asked him to leave the shelter. At that time, Atri says she told officers they had not agreed to evacuate as previously claimed.

Toronto police left the scene without removing Geldart-Hautala from his home and as of Thursday, he remains at Clarence Square Park.

PRIOR CONDUCT IN QUESTION

Even with a valid warrant, Atri said officers' conduct has been far from procedural in their attempt to remove Geldart-Hautala from his home.

“TPS and the City of Toronto have increased surveillance, harassment, and intimidation of Mr. Geldart-Hautala over the past two weeks,” she said.

She says officers have continuously threatened to arrest him from his home, denied him food, water and access to bathroom facilities, and have threatened to discard his belongings and destroy his structure if he evacuates the space.

Both Atri and Geldart-Hautala say officers extinguished the sacred fire.

"A sacred fire is supposed to be sacred -- you're allowing all the people you've lost over the last little while go up in the smoke ... to go free," Geldart-Hautala explained. "As you do, that's your grieving process."

Toronto police denied these allegations to CTV News Toronto, stating “the claim that officers are surrounding the man is inaccurate given the assistance the officers have offered and our role.”

“Officers would not prevent someone from having access to necessities,” a spokesperson for the force said.

The spokesperson says she has attempted prior communication with TPS and the city in an effort to “cease the campaign of coercion and misconduct” but has received no response.

While Geldart-Hautala doesn't know what comes next, he says he has concerns moving forward.

"I don't think they are going to stop harassing me for the fact that I am practicing my Indigenous rights," he said, referring to the his role tending the sacred fire.

Still, he says he feels lucky to be able to support his community and continue his fight to remain in his home.

“I am lucky enough to be here today,” he said at Wednesday’s press conference.

“I am lucky enough to be here to fight for [my tiny shelter] because everybody needs one.”