Ikea monkey's 'mom' appeals in another bid to get pet back 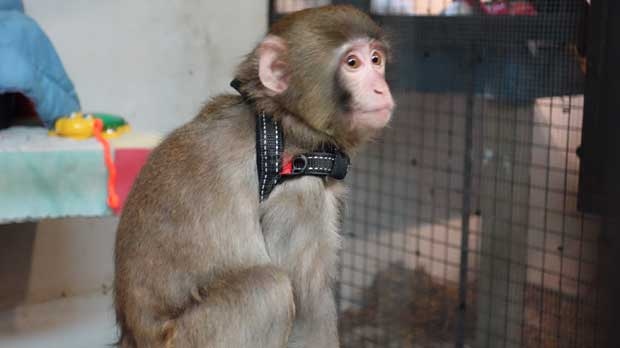 Darwin, better known as the Ikea monkey, is photographed from his new home at the Story Book Farm Primate Sanctuary. (Tom Podolec/CP24)

TORONTO -- The saga of the Ikea monkey appears to be far from over.

A Toronto woman who lost ownership of Darwin the monkey after he escaped from her car in December at an Ikea store in Toronto is taking her case to Ontario's highest court.

A judge ruled last month that Yasmin Nakhuda, who refers to herself as the monkey's "mom," could not get the monkey back, but her lawyers filed a notice of appeal this week.

Nakhuda is asking the Court of Appeal for Ontario to overturn the decision, order the monkey returned to her and order Story Book Farm Primate Sanctuary to pay her legal bills.

Darwin was sent to the sanctuary in Sunderland, Ont., after animal services scooped him up at the Ikea.

Ontario Superior Court Judge Mary Vallee relied on a wild animal legal principle to decide the monkey should stay there. Even though Darwin wore clothing and slept in Nakhuda's bed, the macaque is still a wild animal, Vallee ruled.

Case law dictates that a person only owns a wild animal for as long as it is in their possession, so Vallee found that the minute Darwin made his great Ikea escape, Nakhuda lost her ownership claim.

Nakhuda lists 10 grounds of appeal in the court document, arguing that the judge erred when she found Darwin to be a wild animal and found that none of the exceptions to the legal principle applied.

She argues the judge failed to appreciate evidence that Toronto Animal Services unlawfully detained Darwin when he was held there before being transferred to the sanctuary.

When Nakhuda signed a form transferring ownership of the monkey at animal services it was "tainted" by "undue influence," she argues.

Vallee found that Nakhuda was "upset, but was not unduly influenced" when she signed the form. She is a real estate lawyer with 20 years of experience and would have understood what she was signing, Vallee wrote.

Nakhuda's notice of appeal also takes exception to Vallee's finding that contradictions in some of Nakhuda's testimony undermined her credibility.

Nakhuda did not return a call seeking comment. A lawyer for the sanctuary sent a statement saying the people who work there "strongly" believe Vallee's decision was the right one.

"Darwin is thriving at the sanctuary and he will continue to receive excellent care from the sanctuary's dedicated volunteers," Kevin Toyne wrote in the statement. "The sanctuary will vigorously defend the trial judge's decision in the Court of Appeal."