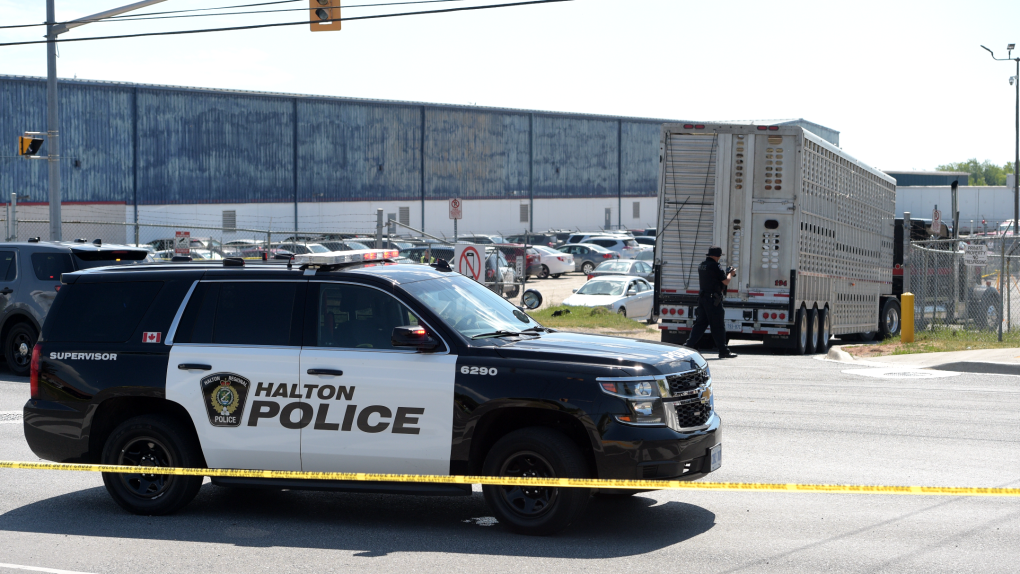 Every Monday, Mark Powell drives to the Burlington, Ont., pork plant where his wife died to give water to pigs on their way to slaughter.

It's what Regan Russell did every week, until one day in June 2020 when a transport truck driver drove over her and killed her.

Police charged the driver with careless driving causing death -- a non-criminal provincial offence -- because investigators said he did not have criminal intent.

Two years later, with the case languishing in court and no trial date yet set, Powell says he has lost faith in the probe and is turning to civil court to try to get answers about his wife's death.

"I want to know what happened to my person," Powell said.

Last week, he filed a $5-million lawsuit over her death. The truck driver, Andrew Blake, the trucking company, Brussels Transport, and Sofina Foods, the company that owns Fearmans Pork processing plant, are among those named in the suit.

The unproven claim alleges negligence on their parts led to the death of Russell.

The claim alleges the driver failed to keep a proper lookout and made an unsafe and improper turn. It also alleges Brussels Transport failed to take steps to ensure the driver was competent and that Sofina failed to provide safety for pedestrians around Fearmans.

"Given that this matter is currently before the courts, we are not able to make a comment at this time other than to say that the allegations contained in the statement of claim against Sofina are unproven and Sofina will vigorously defend this matter," Sofina said in an email.

Neither the truck driver's lawyer, nor Brussels Transport, responded to requests for comment.

Russell, a 65-year-old activist, was demonstrating outside the slaughterhouse west of Toronto, on June 19, 2020, as she had done every week for years. She and some friends, as part of the activist group Toronto Pig Save, protested controversial provincial legislation that had just passed that hiked fines for trespassing on farms and food-processing facilities.

The bill also made it illegal to obstruct trucks carrying farm animals. The bill appeared, in part, to target Toronto Pig Save, whose advocates for years had filmed and given water to pigs inside transport trucks as they neared slaughter. They call it "bearing witness."

Since his wife's death, Powell has lived with anxiety, depression and post-traumatic stress disorder.

He wasn't there at the time, but Russell's friends have described how she died under a wheel of the truck. He's seen video of the aftermath.

"I see it every night when my head hits the pillow," he said.

His friends wonder how he copes.

"I've had some practice," he said, his voice trailing off.

In 2014, Powell lost his 29-year-old son, Zachary. He can still see the paramedics pounding on his boy's chest as he was wheeled on a gurney into an ambulance. Zachary's heart had given out.

Powell is using the strength of his family to move forward after the losses.

He credits his other son, Joshua, for holding him up when he was down, and helping him pick up the decades-long animal rights fight his wife undertook.

Last week on Father's Day, he and Joshua donated a bench at an animal sanctuary north of Toronto to honour Russell. It reminds Powell of a bench in Zachary's name in a Hamilton park.

He and Joshua have also launched the Regan Russell Foundation, a not-for-profit organization dedicated to keeping her voice alive by funding and supporting the battle against the bill she had been fighting.

The foundation is trying to intervene in a constitutional challenge to the laws by Animal Justice.

"It gives us a vehicle to fight bad legislation," he said.

"I have hope and strength, hope that something like that foundation puts a voice for animals on the floor of government and strength knowing that Regan's voice is being heard."

Every week, activists gather to protest outside Fearmans Pork. But now they stand on the median where the trucks stop at the lights -- away from the spot where Russell died -- to give water to the pigs.

"I will always honour her and I will stand for what she stood for until I die," Powell said.

This report by The Canadian Press was first published June 25, 2022.