'I wanted to help': Pickering boy gives back on his tenth birthday

TORONTO -- For his tenth birthday all Colton Smith really wanted was a small party with his friends, hardly extravagant by any standard.

But when COVID-19 made that kind of gathering impossible, the grade four student came up with a charitable plan B.

“I wanted five friends to sleep over, maybe watch some movies, play hockey,” Smith told CTV News Toronto. “This year is different. So I decided to do a food drive. I wanted to help families who aren't doing as well as us in the quarantine.”

St. Paul's on-the-Hill, a community food bank based in Ajax, became the beneficiary of Colton's revised birthday wish. His family used social media to put the word out, encouraging friends and neighbours to drop by their home and donate. 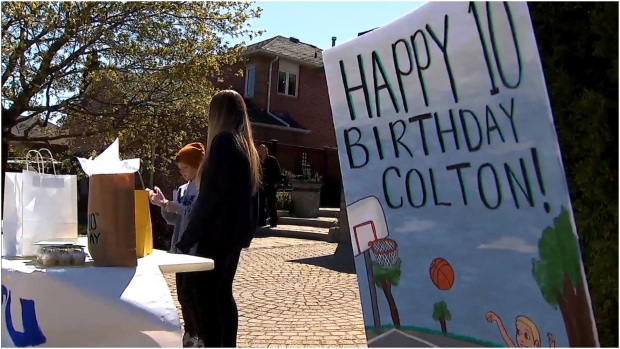 “We felt really bad his birthday got cancelled,” said Jamie Brown, a friend of Colton's mother. “It's a great thing for a child to be so philanthropic,” added Darlene Brown.

Before the clock even struck noon, many of the curb-side donation bins were overflowing.

“There's a lot of food,” observed Colton. “I might have to go to the garage to empty the bins and bring them back out.”

“He's so lucky to have so many friends, family and people from the community come out,” said Jennifer Smith, Colton's mother. 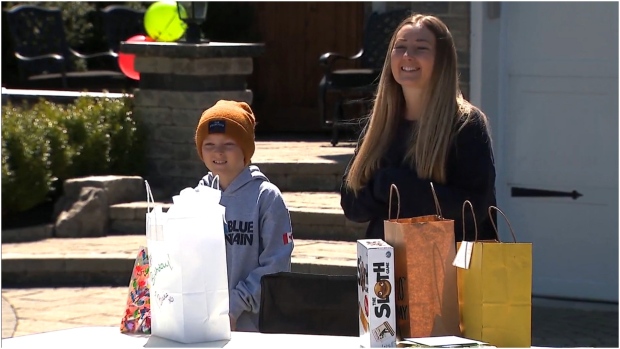 This may rank as one of Colton's most memorable birthdays. And even though his goal for the day was to give rather than receive, many arrived bearing gifts for the food bank, and the birthday boy. An official with the city of Pickering surprised Colton with a brand new baseball glove. For a child who only wanted to share the day with friends, it's no surprise his final birthday wish is a modest one.

“We can't go to a restaurant, so my grandma says she's going to make me a special dish. Hopefully pasta.”