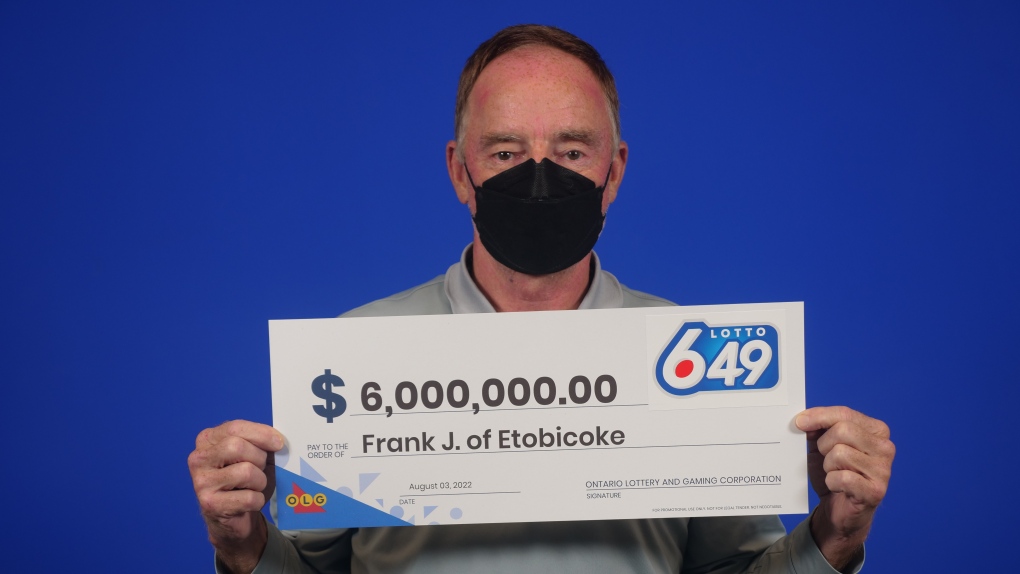 A Toronto man who’s been playing the lottery since the late '70s is set to retire after he won big in a recent Lotto 6/49 draw.

Etobicoke resident Frank Jarman told the Ontario Lottery and Gaming Corporation (OLG) he discovered his $6 million windfall when he checked his June 4 ticket at a local gas station.

“When I saw $6 million appear on the screen I jumped back, and then checked it again. I didn't believe what I was seeing,” Jarman said in a news release published Tuesday.

As an added bonus, Jarman said his wife was with him at the time of the life-changing revelation.

“My wife saw the look on my face and asked what happened and I said, 'I think we can retire!'” he said.

In addition to a surprise retirement, Jarman said he plans to invest and tackle some home renovations with his winnings.

"I feel so blessed and extremely fortunate," Jarman said with a smile. “I always said five or six million is just the right amount.”

The news comes after OLG said last week there are currently two unclaimed multi-million-dollar Lotto Max prizes, both of which were sold in Toronto

One ticket is worth $55 million and was drawn on Aug. 5 while the other $70-million ticket was drawn on June 28.

The NDP are calling on the federal government to take steps to tackle 'greedflation' and get to the bottom of the rising cost of groceries.

A former police officer facing a drug charge burst into a day care centre Thursday in Thailand, killing dozens of preschoolers and teachers and then shooting more people as he fled. At least 36 people were slain in the deadliest rampage in the nation's history.

In his first speech as sovereign, King Charles III voiced his 'love for Harry and Meghan,' signalling that tensions between the Royal Family, and Duke and Duchess of Sussex may be starting to cool. Reducing the rancour between these members of the Royal Family will be key to paving a path forward for the monarchy, says royal commentator Richard Berthelsen.

Canadian officials warn: Turkeys at U.S. border might be turned back

Ahead of Thanksgiving Day, the Canadian Food Inspection Agency is reminding cross-border shoppers that raw poultry or poultry by-products can’t be brought into the country from the U.S. due to ongoing avian flu outbreaks.

What is the Canada-U.S. Safe Third Country Agreement?

The Supreme Court of Canada is set to hear a case brought by several human rights organizations seeking to overturn Canada-U.S. Safe Third Country Agreement. CTVNews.ca breaks down what the agreement entails.

Investigators in California are working to determine the motive behind the killing of a family of four -- including an 8-month-old baby -- as the bodies were recovered Wednesday in a rural farm area after they were kidnapped earlier this week by an armed man at their business.