'I saw bright lights heading towards me': Dump truck crashes into cars and building in Caledon

Police are investigating, and residents are citing safety concerns, after a dump truck crashed into multiple cars and a building in Caledon on Friday morning.

It appears the dump truck was heading northbound when the driver took out a stop light, veered into the southbound lanes, struck multiple cars, and eventually crashed into a building in the area. 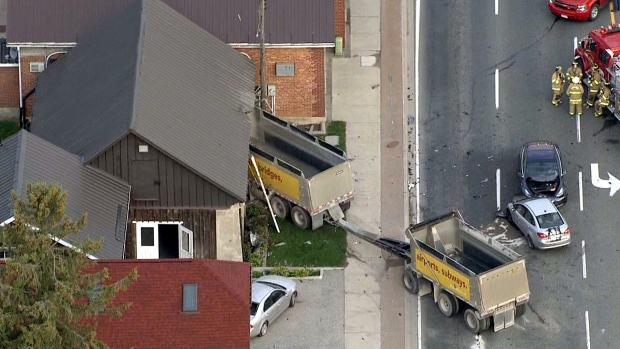 The driver of the dump truck was extricated from the vehicle by firefighters and was taken to hospital with minor injuries.

Some of the occupants of the other vehicles were taken to hospital as well.

“Our of nowhere I saw bright lights heading towards me.,” Dan Sugodinia said, who was driving to work when he was struck by the dump truck. “The truck just barrelled through no brakes, no horn, no nothing. The driver behind me was hit even harder. He asked me if he was ok and he had a big red patch out of his back.”

Officers are also investigating a secondary crash that occurred north of the first collision.

It is unclear how many people were injured in that crash.

Last year a six-year-old girl was killed following a collision with a transport truck. A memorial to the child rests on the side of the highway, just a few kilometres south of today’s accident

“This doesn’t surprise me one bit,” Caledon resident Dave Lindros said. “These trucks here don’t take any speed limits seriously. We need to seriously think about bringing back photo radar.”

“We see some real cowboy tactics from truck drivers,” Councillor Ian Sinclair said. “An extra load a day makes a big difference in their payment. They’re trying to make a living fast. But it’s dangerous. We’ve been lobbying for a traffic study for years but it’s not easy to get MTO and authorities to step up to the plate.”