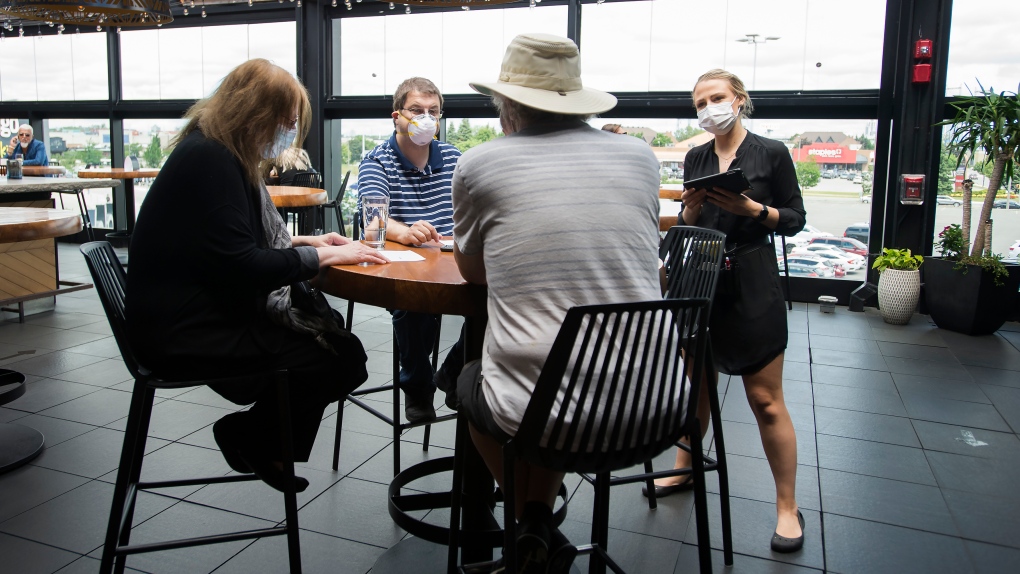 Patrons sit on the patio as a waitress takes orders in Toronto on Wednesday, June 24, 2020.THE CANADIAN PRESS/Nathan Denette

TORONTO -- It was a busy lunch-hour at Hone Fitness on St. Clair Avenue West, despite new requirements that each member produce documents proving they're fully vaccinated.

"It's a good idea, a little bit of extra work, but it's worth it," patron Ted Wilson told CTV News Toronto.

Floor Manager Andre McPherson, meanwhile, said the rollout has been smooth, although regrettably, the gym had lost some clients.

"They haven't come off super angry about it. It's just, you know, 'It's unfortunate that I have to cancel my membership, you guys have been great, but I really don't want to get the shots.'"

Two doors east, at Philosophy Fitness, owner Phil Ortwein says he's actually seeing customers returning to his facility. At one point during the pandemic, Ortwein says he lost about 80 per cent of his business.

"Many of my customers who were maybe a little hesitant to come back in, now all of the sudden feel a sense of relief."

"I'm hoping that it plays out pretty smoothly. You know, like, we were hoping that they would implement the vaccine passports, knowing it would be safer for the customers, and being safer for the staff," said Sienna Ebbinghaus, manager of the Sunset Grill on Wellington Avenue West.

Ebbinghaus says she's hoping for the best -- but is prepared for the worst.

"We have security on standby. We will call the police on you if you're giving the staff an issue. It's not our fault this is happening and we will enforce if we have difficult customers."

Meanwhile, the owner of Cocoa Latte on St. Clair West says she and her husband have decided to shut their indoor dining down, because they don't want to deal with enforcement.

The city's General Manager of Emergency Management and COVID-19 Incident Commander, Fire Chief Matthew Pegg, says coordinated enforcement teams want to support local businesses. Pegg says he is encouraging people to be patient, and to "understand that each of these businesses are simply complying with the regulations that the provincial government has put in place."

"I understand people's fear. I understand it's difficult," gym patron Cindy Letterman told CTV News Toronto. "I think I'm apprehensive of, is there going to be a lot of angry people not being able to go places?"

Chief Pegg says where businesses require assistance in a non-emergency capacity, they should call 3-1-1, and if there is an imminent risk to public safety, they should call 9-1-1. Pegg added that while health inspectors and municipal law enforcement officers will be "out and about", the response will largely be complaint-based.

Children under 12 are still exempt from the regulations, given they are not eligible for vaccination.