TORONTO -- The lineup outside the Walmart at Jane Street and St. Clair Avenue stretched the length of a city block Saturday morning, as people began stocking up ahead of Monday’s lockdown.

Another woman, who originally went to the store just to pick-up medication, said she had decided to do much more shopping than she originally intended, to avoid future lineups.

Over at the Costco at Wilson Avenue and Dufferin Street, customers waited in a line that stretched around the building.

“It’s not the greatest feeling to stand in line, especially when it’s getting colder outside but what can you do? You gotta buy stuff,” Toronto area resident Nir said.

Customer Roberta said she was happy to be able to shop at Costco, which will remain open during the lockdown, but she failed to see the need to shut down smaller businesses.

“My husband is a small little retailer, and having one or two people come into his store is not harming anybody like this. Here people are standing on top of each other.”

Over at Red Carpet Hair Salon on Avenue Road in North York, the news of another closure had many people on edge. Mamak Tabatabei said she has owned the salon for 12 years, and that she’s very worried about the future.

“It’s right before Christmas; they’re closing us down again. They’re saying 28 days. Last time they said two weeks and then it was four months. I don’t know, it’s really frustrating.”

Her daughter, Sarina Seyed, says they’re currently trying to fit in as many clients as possible this weekend.

Natalie, who was getting her colour done Saturday afternoon, says she booked her appointment yesterday, while the lockdown announcement was being made. 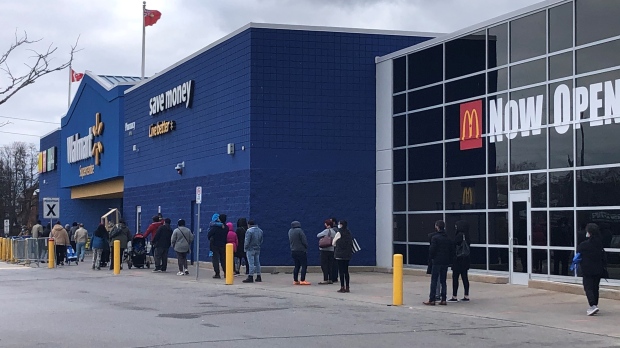 “I needed to get it in before next four weeks of lockdown and try to support the business, and to help my hair.”

A few blocks away, at “Toytown,” a neighbourhood institution since 1952, many customers waited in line in the hopes of getting their holiday gift buying done before the lockdown begins.

“With the shutdown coming on Monday, and with our Hanukkah holiday coming up in the beginning of December, I thought I would come and get something for my grandchildren,” said Karen, a grandmother of eight.

“Today has really been the busiest day of the year for us, in store and online.”

However, while some people are apprehensive about the lockdown, others are taking things in stride.

“Everything is open. All the grocery stores are open, so why we have to buy more? It’s too much hassle to store everything,” said one woman.

The large crowds are actually driving some customers away.

“I would rather go in a store where I’d pay two dollars more but there’s not a big crowd and pick it up from there. My safety is paramount,” said one man from the driver’s seat of his minivan.

Still, many are panic buying, despite the fact the premier has reiterated many times — stores will have enough supplies to prevent shortages.