'I felt flattened': Canadian with COVID-19 describes what it's like to have the virus

TORONTO -- A young Canadian man recovering from COVID-19 says the symptoms of the virus are unlike anything he's ever experienced before.

Toronto man David Anzarouth began experiencing flu-like symptoms after he returned home from a vacation in South Beach in Miami, Fla. on March 11.

The 25-year-old said the symptoms started when he arrived home from the airport. He began feeling sluggish and had a headache but chalked it up to a busy day of travel.

"I stayed home that night and made myself food in the apartment and went to bed early," Anzarouth, who lives by himself, told CP24 on Friday morning.

He said he worked from home the following day but his condition was going downhill. He was taking over-the-counter medication to help ease his symptoms but they weren’t working.

"I started to feel exponentially worse," he said. "My head was pounding and I felt as if I was drugged. I wasn’t myself."

"I was drenched in a pool of sweat, shivering, had such intense chills. I felt flattened."

Over the next few days, Anzarouth said his symptoms became worse and on Sunday he went to Toronto General Hospital to be checked by doctors. He said he began feeling shortness of breath and tightness in his chest.

"I would be gasping for air," he said. "I was so disoriented and completely out of it. I was trying to breathe but I was having difficulty doing so." 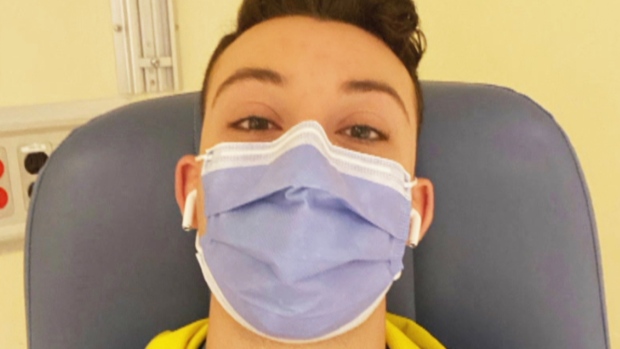 He said he was immediately seen by nurses and doctors when he arrived at hospital and underwent a battery of tests. Medical staff spoke to Anzarouth from behind a closed door and only made contact with him in a full head-to-toe gown.

"The whole time everyone was extremely nice and very communicative."

Anzarouth was released from hospital and learned on Monday that he was COVID-19 positive. He has been in self-isolation at his apartment since and is slowly recovering.

"Since Monday, I have been continuing to rest, push fluids and continue my isolation. Apart from my trip to the hospital … I have not left my apartment since coming home from the airport," he said.

Anzarouth is now urging others to stay home and practice safe social distancing to avoid getting sick.

"This virus affects everyone differently. You can be asymptomatic and be a carrier for the virus," he said.

"We're going to overwhelm the system if we don’t practice safe social distancing. I urge you to stay home and stay alone and social distance."