'I beat it': Big celebration for 82-year-old Ontario man who recovered from COVID-19

TORONTO -- Herb Knapp’s long road to recovery has become a success story everybody is celebrating.

The 82-year-old Oshawa, Ont. resident contracted COVID-19 in mid-March. When he learned he was positive, his mind immediately turned to his five grandchildren.

Knapp’s daughter, Jennifer Brown, said her father has an underlying lung and heart condition and went into isolation for about three weeks while doctors treated him. At one point the family got a phone call from the hospital he had been admitted to explaining that Knapp’s situation was grave.

“It’s very terrifying not being able to see somebody and being close to somebody and relying on somebody else to do the things that you can’t do,” Brown said, holding back tears. “He eventually got better, he slowly recovered.”

“He started complaining about the food and I’m like he’s going to beat this,” Brown added.

After physiotherapy to regain his strength, health-care workers clapped and cheered for Knapp as he finally got to leave the hospital.

“One of the best days of my life,” Knapp said.

When Knapp arrived at his home he was greeted with more joy, signs made by kids from a local hockey team and his grandchildren, welcoming their grandpa home.

“Brought tears to my eyes,” he said. 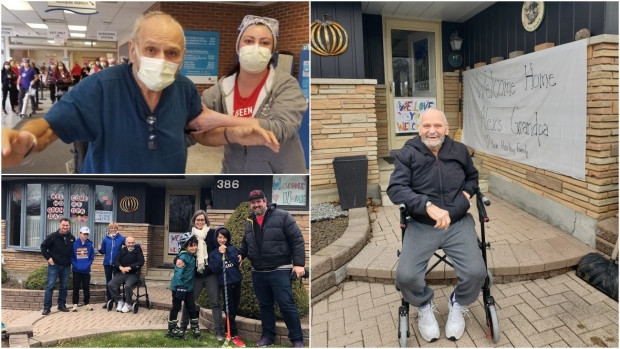 One of Knapp’s physicians said his recovery is not only thanks to the great team that was around him, but also his bravery.

“I think it’s wonderful of course with everything he’s been through. It’s remarkable and speaks to his will to live,” said Dr. Yaniv Hason of Lakeridge Health.

“He’s cooking his own meals, he’s reading the books and eating the food he enjoys, he’s talking through the door and waiving through the window,” said Brown.

Knapp says he now wants to give others with the virus hope they too can overcome the terrible disease.

“I beat it. It’s amazing. That’s what they keep telling me,” he said.

“I’m sitting out here in front of my house. It’s super-duper,” said Knapp.