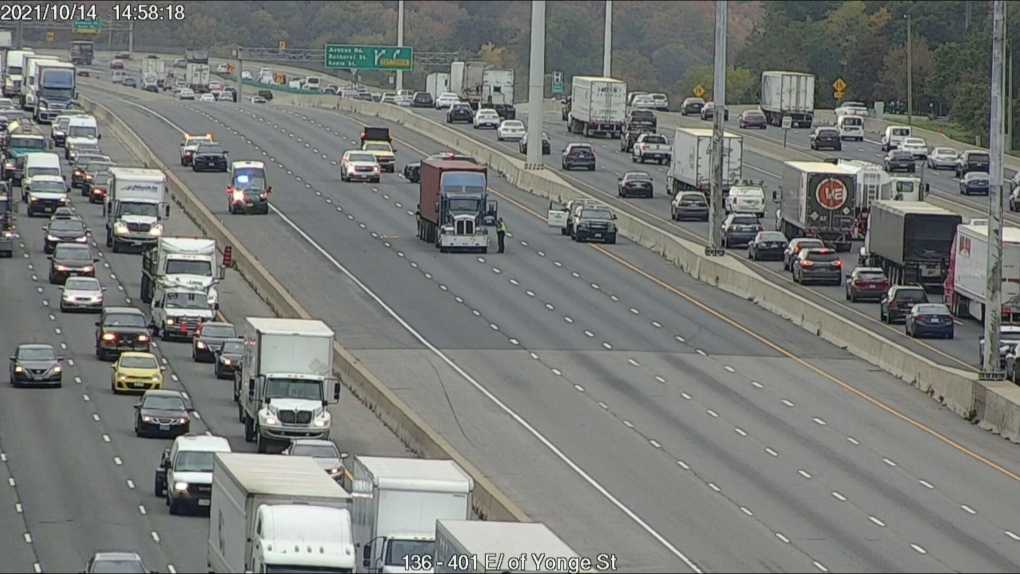 Police respond to the eastbound express lanes of Highway 401 just east of Yonge Street after a pedestrian was struck on the highway Thursday October 14, 2021.

TORONTO -- The eastbound express lanes of Highway 401 have reopened after being shut down for several hours following a collision that critically injured a female pedestrian on the busy highway.

A truck hit the woman in the eastbound express lanes just east of Yonge Street shortly before 1 p.m.

“The female was apparently in a live lane of traffic when she was struck by a transport truck, and our investigation obviously is just in its infancy, trying to determine exactly what led her to that location and why,” Ontario Provincial Police Sgt. Kerry Schmidt said in a post on Twitter.

The pedestrian was transported to hospital with life-threatening injuries.

The eastbound express lanes were shut down for several hours between Allen Road and Yonge Street so that a collision reconstruction team could investigate and the ramp from northbound Allen Road to eastbound Highway 401 was also closed.

The driver of the transport truck stopped and is cooperating with police, Schmidt said.

OPP are now looking to speak with anyone who witnessed the collision.

“If there are any witnesses, anyone saw what happened, or anyone saw a pedestrian prior to the collision that happened just a few minutes ago, we would certainly want to speak to you,” Schmidt said.

He urged anyone with information, particularly anyone with dashcam footage or who saw the pedestrian, to call the Toronto OPP detachment.