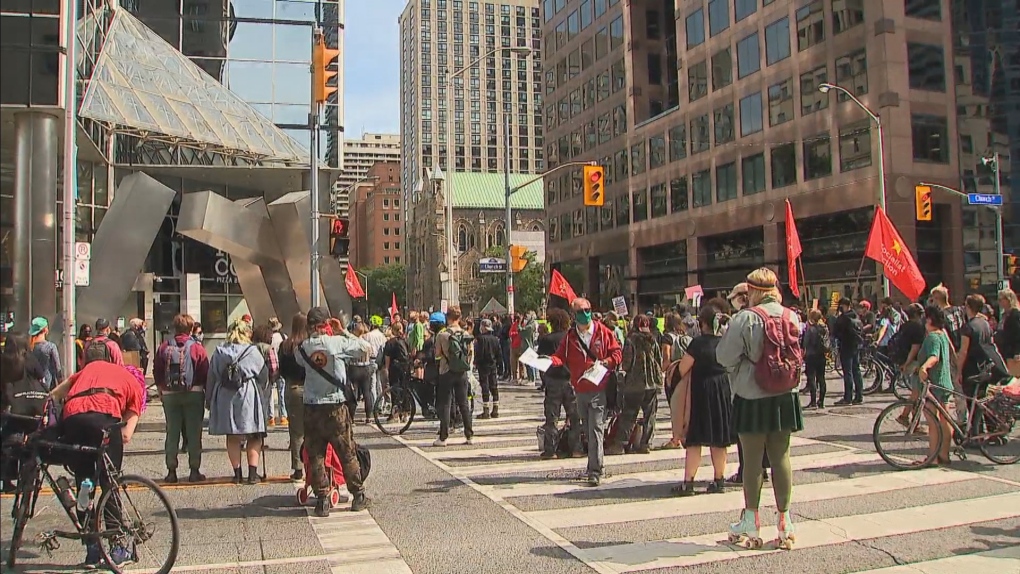 Hundreds protest the arrests of Six Nations land defenders outside the Ontario Ministry of Indigenous Affairs in downtown Toronto.

TORONTO -- Hundreds gathered outside the Ontario Ministry of Indigenous Affairs office in downtown Toronto on Saturday to protest police violence and the arrests of Six Nations land defenders.

Protesters carried signs reading "land back," "respect Indigenous sovereignty," and "no cops on stolen land," and blocked the intersection of Bloor Street and Church Street.

The protest comes following the arrests of members of the Six Nations of the Grand River in Caledonia, Ont. who have been occupying a proposed housing development site since late July.

Demonstrators argued that the development on the site, dubbed as 1492 Land Back Lane, violates the Haudenosaunee people's sovereignty.

The Haudenosaunee – a group that includes the Mohawk, Oneida, Onondaga, Cayuga, Seneca and Tuscarora First Nations – are also known as the Iroquois or the Six Nations and were involved in a similar land dispute in 2006.

According to Haldimand County, Foxgate Developments purchased the land in 2015. In 2019, an agreement was reached between Foxgate and the Six Nations elected council to build on the site, right across the street from the Douglas Creek Estates site.

While the Ontario Provincial Police claim that they have only arrested 21 people, protest organizers said 26 people have been taken into custody.

The occupation drew the premier's ire in August, saying that it is "wrong," and protesters "can't go in and take over people's futures home."

– With files from Kerrisa Wilson and The Canadian Press