TORONTO -- Close to 3,000 forest fire evacuees from remote northwestern Ontario First Nations are settling into temporary accommodations across the province, including hundreds of people at a Mississauga hotel near Pearson International Airport.

Evacuees Joyce Cook and Abigail Wesley made the trip earlier this week from Cat Lake First Nation, a fly-in community about 2,000 kilometres away.

“I know a lot of people didn’t want to come because it was too far from home, the distance. But we really had to leave because of the safety of our children and elders,” Cook said.

Several residents from the community told CTV News Toronto that there are fires burning around the community and that they had been put on standby to evacuate for about a week as smoke created hazardous conditions.

“I had my AC going and I had to turn the AC off because of the smoke inside my house and my baby was getting very sleepy,” Cook said.

“When I woke up in the morning, I couldn’t see across the road or my neighbour’s house, that’s how smoky it was.”

“I wanted to leave. I’m one of the ones with asthma problems,” Wesley said, who went on to explain she was also concerned about her 89-year-old mother and grandchildren. 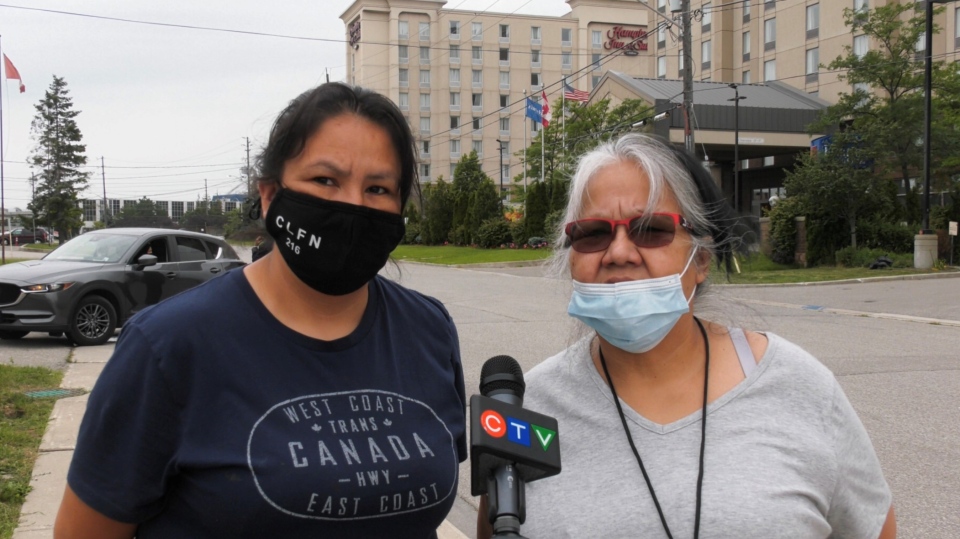 Emergency Management Ontario said about 200 people have made the trip south from Cat Lake so far. Cook and Wesley said the number of people from the community is around 300 and that about half of the evacuees are children

Packing up and leaving home is not easy for many, they said, especially coming to a large urban centre like the Greater Toronto Area.

“I kinda felt the sadness because our home is a comfort zone,” Cook said.

“I’m kind of used to travelling, but I can’t imagine how the other ones feel, the ones that never go anywhere that are always in the smaller areas,” Wesley said.

“They didn’t know this place existed. The children are amazed at the high buildings. They don’t know the risks of being here. It’s not like living in the community of Cat Lake First Nation.”

Cook and Wesley both thanked the city and local agencies for welcoming the community. They said there is a bus to take people shopping, laundry and food services, which they appreciate, and that centres from other reserves are bringing traditional food to the hotel Saturday evening.

Wesley said initially several community members were concerned about an increased risk of COVID-19 in the GTA, but those fears have been eased, as they said there is enough space at the hotel and security is helping ensure people don’t come and go that are not supposed to.

Cook and Wesley said the last time evacuations were necessary from Cat Lake First Nation was 10 years ago, again when fire threatened the community. Wesley said several hydro poles burned at the time.

They said there is no timeline yet when they may return home.

The Ontario government has been supporting the evacuated five First Nations through Emergency Management Ontario (EMO) and other departments.

“We would like to thank Thunder Bay, Kapuskasing, Cochrane, Timmins, Greater Sudbury, Kenora, Sioux Lookout, Sault Ste. Marie, Peel Region, Mississauga, Lac Seul FN and the NAV Centre in Cornwall for agreeing to host evacuees," the spokesperson said, adding that they also "appreciate the ongoing collaboration with Dryden and Ottawa acting as a hub for evacuees."