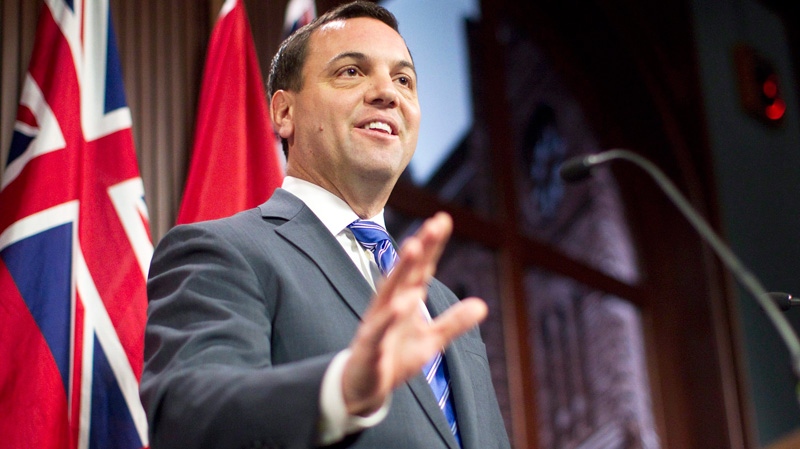 TORONTO - Ontario's cash-strapped Liberals should think twice before rolling the dice on a casino in the heart of the province's most populous city to help slay their massive $16-billion deficit, Opposition Leader Tim Hudak warned Tuesday.

Building a gambling palace in downtown Toronto is just another way for the government to put its hands in people's pockets, rather than finding ways to operate more efficiently, he said.

"Our focus should be on reducing costs, reducing the cost and size of government, not vacuuming more money out of the wallets of Ontario families."

The once-troubled and "bloated" Ontario Lottery and Gaming Corp. must show that it has put its own house in order before going ahead with anything new, Hudak added.

"To date, no, I'm not convinced they've fixed their own internal problems," he said. "Not by a longshot."

Putting a casino in Toronto is a longstanding proposal that has been mulled over by successive Ontario governments, well before the Liberals took power in 2003.

But Finance Minister Dwight Duncan added fuel to the fire Monday by suggesting that he's receptive to the idea because it could help bring in a new source of revenue, adding to the $1.9 billion that OLG contributed to the treasury in 2010.

The Crown corporation -- which is also moving ahead with online gambling -- launched a "land-based gaming" review a year ago at Duncan's request.

"I look forward to getting the bulk of their recommendations, us having a look at those and then moving forward from there," Duncan said Monday.

"So it would be premature to comment, other than to say we wouldn't do anything like that without a clear expression by the city of Toronto that they'd like it."

OLG once built casinos in border cities to attract American tourists, but it's an outdated strategy because borders are more difficult to cross and the loonie is much stronger relative to the U.S. dollar, Duncan added.

When OLG opened Caesars Windsor in his hometown, there were no casinos in neighbouring Detroit, he said. Now there are three in Detroit and another coming to Toledo, Ohio.

"That world has changed, so what does that mean going forward?" Duncan said. "How do we continue to protect those border casinos as, at the same time, we maximize the profit potential of the OLG?"

But a new Toronto casino could also draw gamblers away from other OLG casinos in places like Niagara Falls, said Hudak, whose Niagara West-Glanbrook riding borders that city.

"What is going to be the impact on the bottom line in terms of jobs and overall revenue?" he said.

"I think there is a considerable concern about cannibalization of existing assets."

It also has six other casinos in Brantford, Point Edward, Sault Ste. Marie, Gananoque (near the Thousand Islands), Thunder Bay and Point Perry.

Municipalities that host casinos and slots at racetracks receive a cut of the slot machine revenues, which can add up to millions of dollars a year. For example, Toronto's 2010 share from the Woodbine Racetrack amounted to almost $16 million.

The lottery agency has seen its share of troubles in recent years as provincial watchdogs issued scathing reports on insider wins and expenses.

OLG's troubles culminated in August 2009, when Duncan cleaned house by firing then-CEO Kelly McDougald and replaced its board of directors.

That same day, he released thousands of pages of what he called "unacceptable" expense claims filed by lottery executives, which included expensive dinners, gym and golf clubs memberships -- even a $1.12 grocery bag.