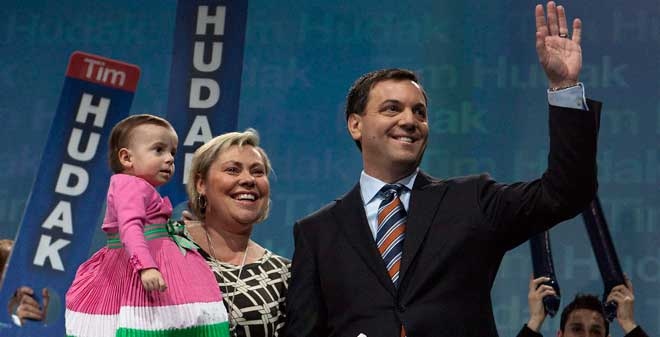 TORONTO - Ontario Progressive Conservative Leader Tim Hudak appeared to shy away from his previous anti-abortion position Monday, saying he doesn't plan to re-open the issue if he wins the Oct. 6 provincial election.

When he was running for the PC leadership in 2009, Hudak's representatives told the Association for Reformed Political Action he is pro-life and had signed a petition calling for the defunding of abortions and to support doctors who don't want to perform the procedures.

But Hudak seemed reluctant to confirm he had signed a petition when asked about it by reporters Monday.

"I may have signed a petition from my riding in that respect, but listen, let me be clear: we are not reopening this debate," said Hudak. "Just like the federal Parliament, we would not be reopening that issue."

However, the Opposition Leader refused to say if he still opposes abortion, walking away from the microphone when reporters asked repeatedly if he still considered himself pro-life.

The Campaign Life Coalition, an anti-abortion group, said Hudak was "solidly" opposed to abortion when he first ran for provincial office in 1995, but since then has not responded to any of their questionnaires "nor done anything related to life and family issues."

Premier Dalton McGuinty, who was not available Monday for comment, has said in the past that he supports a woman's right to choose and public funding of abortions to ensure they are safe.

Finance Minister Dwight Duncan, who also supports a woman's right to choose, accused Hudak of flip-flopping on the divisive issue.

"I think his integrity is an issue," said Duncan. "He does one thing and says another and then tries to pretend he didn't do it. People have strong views on this, and he's trying to have it both ways."

The NDP pointed out it is the only party at the Ontario legislature whose entire caucus received a failing grade from the Campaign Life Coalition for its unanimous position supporting a woman's right to have an abortion.

There are plenty of Liberals and Conservatives who oppose abortion and the public has a right to know where their leaders stand, said the NDP's Michael Prue.

"Hudak did things to get the leadership that maybe he shouldn't have," said Prue. "He can't have it both ways; if you believe that enough to sign the petition then you believe it, and if you don't believe it enough he ought not to have told people that in the past."