How will Highway 413 and the gas tax impact Ontario voters this election?

The building of a new highway in Ontario has been the source of a lot of contention among party leaders during the election campaign.

Highway 413, which is being touted by the Doug Ford Progressive Conservatives as a way to fight gridlock and save commuters 30 minutes in driving time, would run for about 59 kilometers east from Halton to York Region and connect to Highway 401, Highway 407 and Highway 410.

The cost of the highway is unclear and was not included in the Ontario budget, which is ultimately being used as the PC’s re-election platform.

Liberal Leader Steven Del Duca has said that he would cancel Highway 413 if elected—a move that echoes what was done by the previous Liberal government prior to Ford becoming premier.

Del Duca, whose riding of Vaughan-Woodbridge would be directly impacted by Highway 413, has long said the government is downplaying the disadvantages of a six-lane roadway.

“I'm the only person on this stage tonight whose community is directly impacted because of this proposed highway,” Del Duca said at the election debate on May 16.

“'I’m also the person who several years ago, when I was serving as Minister of Transportation at that time, I saw that this was a mistake, a colossal mistake, that you don't need.”

Both NDP Leader Andrea Horwath and Green Party Leader Michael Schreiner have said they would repeal the proposal, citing a better use for the money as well as environmental concerns as the reason. The majority of local municipalities impacted by the project—with the exception of Brampton—have also pulled their support.

But what do voters really think about the proposal?

According to a data analysis by Environics Analytics, it appears as though the ridings impacted by the highway consist primarily of voters who drive above the provincial average of 22,073 kilometers a year.

At the same time, some of those same voters appear to be environmentally conscious; which could impact whether or not they support the highway.

Environics Analytics also analyzed the “Ecological Lifestyles” of voter groups to determine how likely a group would give high priority to integrating environmental concerns with purchasing criteria.

“While residents drive a lot in these areas, residents just to the south of the corridor also show strong Ecological Lifestyle, which is a social value that indicates residents give high priority to environmental considerations when making purchases,” Rupen Seoni, vice president of Environics Analytics, explained.

“In summary, even though residents drive a lot in this part of Ontario, that doesn’t mean they will automatically favour new highways.”

Seoni says it is unclear if local council members are out of touch with what their residents want or if the PCs have made a miscalculation with their policy.

A large part of the proposed highway will travel through Dufferin-Caledon, where residents drive an average of 25,518 kilometers a year. The same group of people have a below average Ecological Lifestyle.

In Brampton West, the average driving time is significantly higher, at 36,684 kilometres a year. Those same residents, however, have a larger than average Ecological Lifestyle.

In Del Duca’s riding of King-Vaughan, residents drive on average 27,686 kilometers a year and their Ecological Lifestyle index sits near the provincial average.

The map below shows what ridings Highway 413 will run through and how much residents drive annually. It also shows how environmentally minded residents are.

WHAT ABOUT THE GAS TAX?

Seoni says that, obviously, those who drive the most and therefore have to purchase more gas will benefit from the proposed six-month gas tax reduction under the PCs’ plan.

Earlier this year, the Progressive Conservatives introduced legislation that would lower the gas tax by 5.7 cents per litre and the fuel tax by 5.3 cents per litre between July and December.

“It’s clear the segments that vote PC by wide margins will benefit the most from this tax cut because those segments also tend to drive the greatest distances,” Seoni said.

However, he notes that the voter segment within Brampton—which typically includes middle to lower-middle income families where there are large numbers of newcomers living in multi-generation households—could be the deciding factor.

“This is the largest voter segment and the PCs took the largest share of votes in 2018, but only by a hair: they got 36.5 per cent, while the NDP received 34.7 per cent. This policy may be a motivator to retain these crucial votes, and turn into some riding wins where the races are tight.” 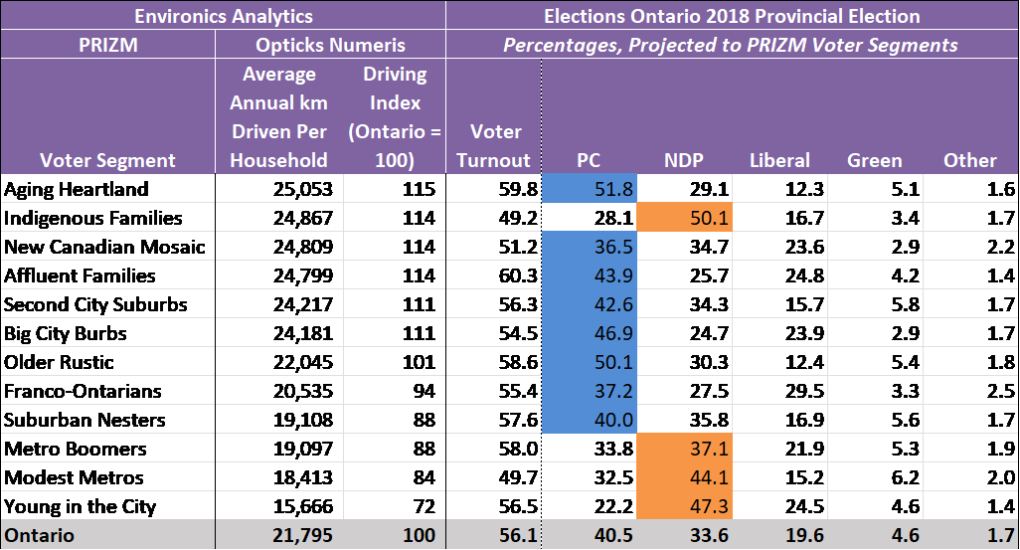 This chart shows the average distance driven per household in each voter segment. (Environics Analytics)

This same voter segment makes up a substantial population in 12 crucial races in which the ridings were won by fewer than 10 per cent in 2018, Seoni added.

Environics Analytics and CTV News are both owned by BCE Inc.

A day after Russian President Vladimir Putin declared victory in seizing an eastern Ukraine province essential to his wartime aims, a city in the path of Moscow's offensive came under sustained bombardment, its mayor said Tuesday.

Two climate change protesters were arrested after they glued themselves to the frame of a famous John Constable painting hanging in Britain's National Gallery, the central London museum and police said.

The 30 NATO allies signed off on the accession protocols for Sweden and Finland on Tuesday, sending the membership bids of the two nations to the alliance capitals for legislative approvals -- and possible political trouble in Turkey.