How to make your donations count this holiday season

TORONTO -- Canadians will give about $16 billion to charity in 2019, but some of those dollars will have a bigger impact than others.

Charity Intelligence Canada is an organization that monitors other charities to measure the impact they actually have with the donations they collect.

The Top Ten Impact Charities of 2019 have shown financial transparency and a demonstrated impact. They also show a high percentage of every dollar donated going to the charity's programs. For example, The East York Learning Experience charity was given an "A" for reporting about 92 cents of every dollar going to its programs.

“Every charity in Canada has a nine digit registration numbers if you see a donation number the charity can issue a receipt,” Bahen said. 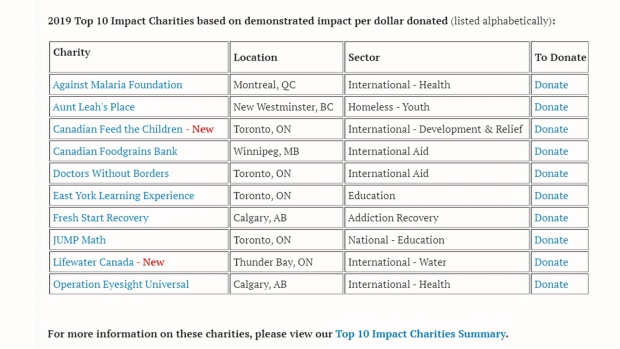 You may wish to stay away from charities that spend too much on overhead costs. For example, one charity on the government website showed that almost 96 per cent of the money it collected is spent on management and administration and only 4 per cent is spent on programs. Also watch out for "for profit" fundraising companies that take a huge portion of donations.

Penny Wang of Consumer Reports says that many of these companies fundraise for charities but keep a large percentage of the money collected.

“If you're contacted by a professional fundraiser you might want to consider giving directly to the charity instead. The fundraiser might keep 75 per cent to 90 per cent of the money,” Wang said.

Charity Intelligence Canada says the best way to donate money is through a charity's website.

You should also ask if the charity will share your information. Bahen said on paperwork she received, a charity had fine print saying they would.

“If you don't tick this box the charity will share your address and information with other charities."

Charity intelligence says that if you're approached by a charity, you shouldn’t feel pressured. You can always ask for a brochure or their website so you can do research before you give. Also, watch out for “sound-a-like” charities. These are charities that may be using names that are similar to reputable charities when they may be keeping most of your donation for administrative costs rather than charitable programs.