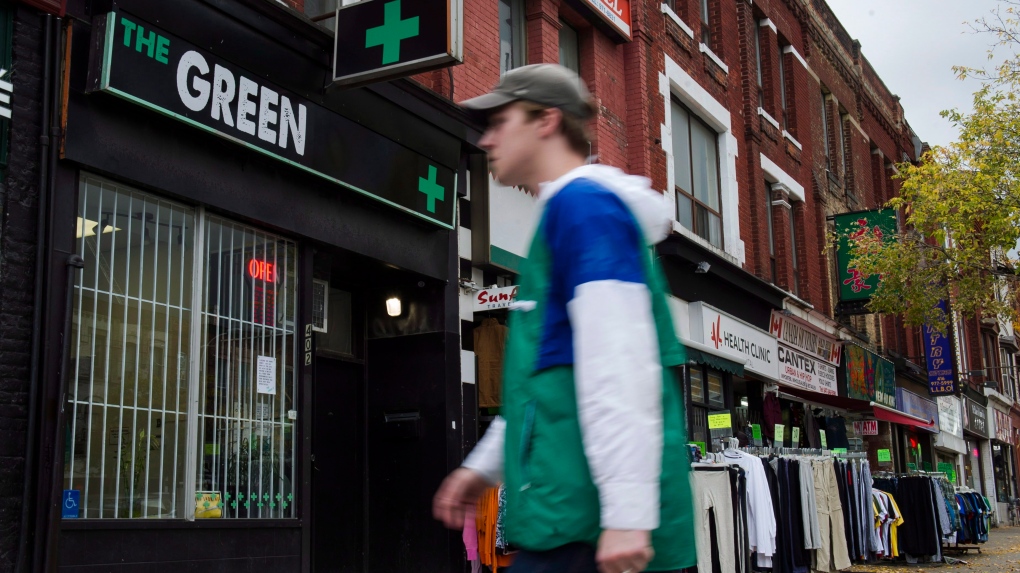 People walk past a cannabis dispensary in Toronto on Monday, October 15, 2018. (THE CANADIAN PRESS/Christopher Katsarov)

TORONTO -- The number of cannabis retailers in Ontario has grown steadily since 2018, when selling the drug in retail settings first became legal, and the number of stores in province has now reached into the thousands.

In fact, the province recently hit a new milestone in the industry, surpassing 1,000 open, authorized cannabis retailers in Ontario.

You can now shop at over 1000 Authorized Cannabis Retailers across Ontario, owned and operated by your local buds. Find a store near you: https://t.co/GA1K26YcY7 pic.twitter.com/3ElBh7ZxZG

“Not only is this a huge step for the legal market, but it has created a diverse roster of retail partners that we’re so proud to work with every day.”​

Toronto cannabis retailer 6 of Spade became the 1,000th store in the province when it opened in August of this year.

In March, a report by OCS showed that the province only had 527 pot shops across 122 regions, meaning that the number of licensed retailers has nearly doubled since early spring,

Toronto retailers make up approximately one-quarter of all the cannabis retailers in the province, says OCS. Their website currently lists nearly 250 retailers within the city.

According to the agency, as of July 2021, the average distance between consumers and a cannabis shop in Toronto dropped to 6.5 kilometres from 19 kilometres between April 2020 and March 2021.

In fact, the number of legal cannabis retailers currently operating in the province has well surpassed the amount of LCBOs, which the government says there are 660 of.

This rapid growth isn’t necessarily good news for all, says the agency.

“Unfortunately, this rapid growth will likely result in some retailers being faced with increased competition and a crowded marketplace, which could result in some closures and market rightsizing," David Lobo, the interim president and chief executive of the Ontario Cannabis Store, said in an annual report released this summer.

"At the core, all retailers will be challenged to further drive a relentless focus on targeted consumer segments and differentiating themselves from others," he said.

The Alcohol and Gaming Commission of Ontario website features an interactive map that allows you to view all legal retailers within the province.