How GTA restaurants are preparing ahead of reopening patios

TORONTO -- With the Ontario government giving many communities outside the Greater Toronto Area the green light to reopen patios, some restauranteurs in the GTA are preparing to restart outdoor service in anticipation.

Yorkville’s Hemingway’s Restaurant and Bar has been in business for 40 years. Over the past month, the owners have been researching guidelines in B.C. and Alberta, two provinces ahead of Ontario when it comes to restarting the economy during the pandemic.

Hemingway’s said that when the patio does reopen, customers can expect to find hand-sanitizer, a host collecting a name and number from the party for public health contact tracing, and space between tables.

It also said staff will be screened before work and will walk in one direction when serving. For customers, there will be no standing zones. Instead of walking in and out of the main door, there will be a separate exit.

“We don’t want to have any sickness, any sick people coming into the restaurant. We’re following all the rules, if they look suspect or anything they won’t be allowed in,” said co-owner Martin McSkimming. 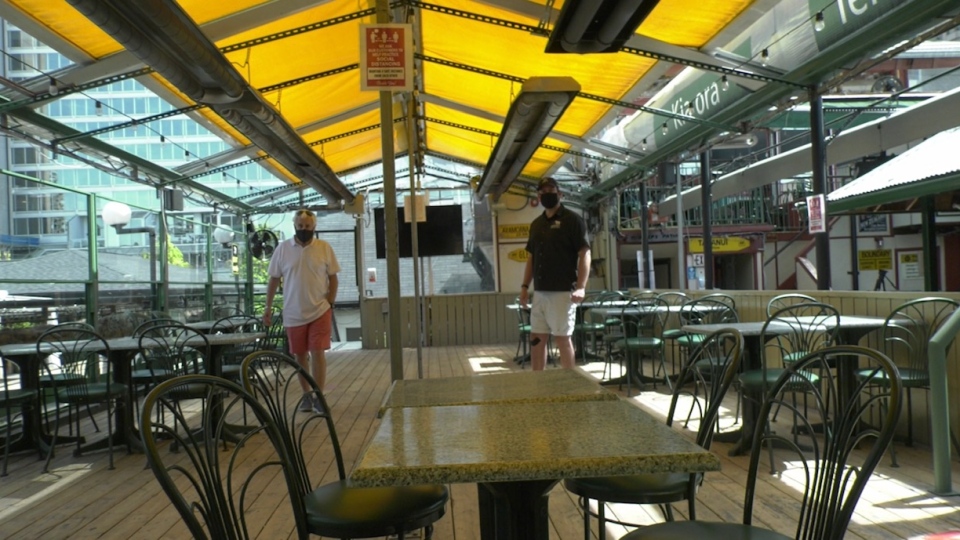 Dining outdoors doesn’t come without risk. Dr. Tasleem Nimjee, an emergency room physician and director of medical innovation at Humber River Hospital, said that people need to consider their health before going to a restaurant, especially if they are vulnerable to infection.

”Where you can’t be sure to maintain that distance, you should be wearing a mask,” Nimjee said.

“If you’re going to a restaurant obviously you can’t wear your mask while you’re eating, that’s where again if you’re sitting at a table with just your household, people that you live with that you’re normally not distanced from that’s one thing, but you want to keep that distance from others around you.”

Not every patio is rushing to prepare for reopening.

Burdock is a brewery, music venue and restaurant in Bloordale that’s pivoted to bottle and delivery service.

With revenue still coming in during the pandemic, Park said he would feel better waiting until outdoor service is confirmed in Toronto.