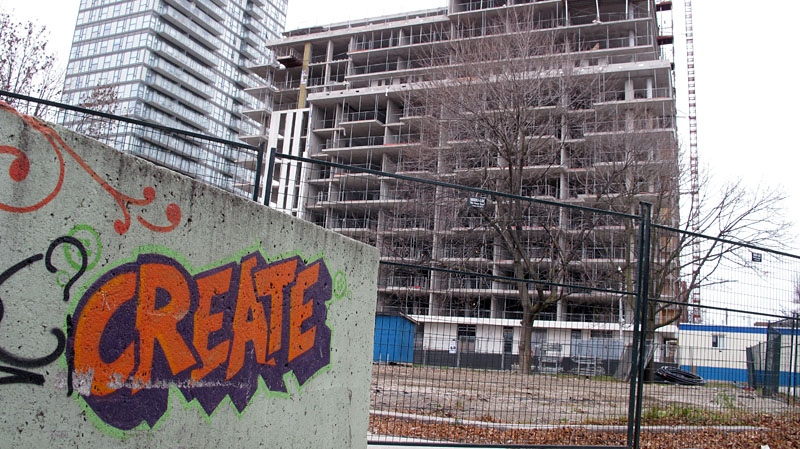 Graffiti in Regent Park serves to illustrate the backdrop, the contruction of one of the new high-rise buildings, part of the Regent Park revitalization project.

The residents of Canada's largest and oldest socially assisted housing project are, for the second time in half a century, the subjects of a major social experiment.

And many feel they're being treated like so many laboratory mice.

Prof. Laura Johnson of the University of Waterloo has been studying Toronto's notoriously poor and crime-ridden Regent Park, and interviewing residents to find out how they feel about the so-called revitalization -- essentially the total razing and rebuilding of their community.

The sparkling new units will replace the crumbling low-rise, high-rise and townhouse buildings that have defined the park for decades.

The goal is to give new life to the stigmatized neighbourhood by introducing new businesses, parks and most importantly a mixed-income population, and by eradicating the one-way streets and cloistered design that has turned Regent Park into a 70-acre low-income ghetto.

The project is also a social experiment of sorts, marking the first time the private and public sectors have partnered on such an endeavour in Canada.

While some of the new units will be owned by the Toronto Community Housing Corporation with geared-to-income rent, others will be sold at market value by the developer and others will be rented at affordable rates.

Johnson, a professor in the U of W's planning department, followed 52 households that were displaced when the first buildings were torn down in Phase 1 of the redevelopment.

She found their overarching feeling to be one of exclusion and helplessness.

Johnson said most of those families feel they haven't been fully included in consultations about the project as it has evolved.

"They felt it was a low-level consultation rather than taking a real design role," Johnson said recently, during a presentation at the Ontario Non-Profit Housing Association's annual conference.

While residents were invited to consultations early on, most felt the process didn't provide the opportunity to participate in the planning of the look and feel of the new Regent Park. The final decisions were all left up to the developer, they said.

There was also widespread frustration when changes were made to the process, such as the selection criteria used to determine who would get the first new units.

Johnson said many of the households she interviewed felt the TCHC was picking and choosing the tenants who were "good enough" to receive new housing.

The original promise of the revitalization was that all 2,083 geared-to-income units would eventually be replaced with new apartments and townhouses.

One characteristic that sets the experiment apart from others is that all residents were guaranteed the legal right of return, if they were willing to wait it out.

But many reported feeling pressured to forfeit that right and to instead resettle elsewhere -- in three new buildings on Carleton, Richmond and Adelaide Streets, for instance.

Though these buildings are just a few blocks from Regent Park, they don't provide the community and social services that exist within the park, designed specifically to serve its residents, Johnson said.

One group of eight residents, who became close friends over the years they were neighbours, approached the TCHC and asked if they could be settled into the new buildings in a group. But they were told that wasn't an option.

Johnson said there seemed to be a feeling that the sense of community in Regent Park was being lost, and that there was little residents could do about it, that a place that was "very ordinary, but very special" would never be the same.

"'These building are coming down and when these buildings are broken down parts of us will be lost,'" Johnson said, quoting one of those she interviewed.

Sixty years ago, when Regent Park was built to replace slum housing -- becoming the first socially assisted housing community in Canada -- it was also an innovative but experimental project, with the residents serving as the guinea pigs.

Once completed it was seen as a shining success, a feeling that is evident in films from the era.

"Everything is sparkly and new and tidy, and kept that way, the better floors, for instance, and better children," said one promotional film from the 1950s, released shortly after tenants had moved into the new development.

That has changed, Johnson said. The area is now stigmatized as a place where criminal activity, gangs and drug dealing are rampant, and Regent Park is now considered a major planning failure.

But this is a chance to fix the mistakes of the past and even set a new standard for future projects, Johnson said in a synopsis of her study. She held out hope for the outcome, despite the bleak feedback she has received from residents.

"If it works -- from the perspective of the original residents -- it could be a model," said Johnson.

"It really is a special community, very vital and strong."