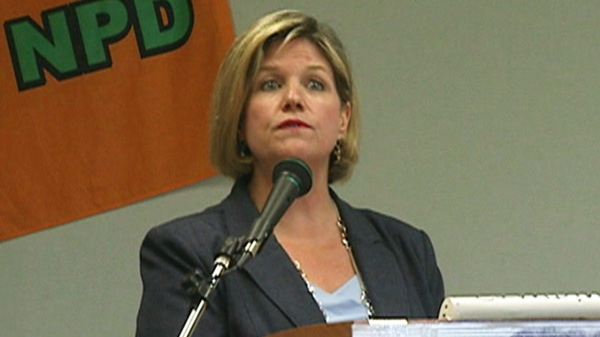 Ontario New Democrat Leader Andrea Horwath cycled squarely into the centre of the biking and public transit debate on Thursday, promising to invest in cycling networks and freeze transit fares should she become premier.

Horwath said that a New Democrat government would make it easier for Ontarians to live eco-friendly lives, announcing a series of transit freezes, eco rebates and investments in cycling networks.

"We all live here. We all breathe the same air and drink the same water. But we don't all shoulder the same load," Horwath said during a press conference on Thursday.

"In tough economic times it shouldn't be this hard to make smart, environmental choices. Any government that is serious about the environment must make going green affordable for everybody."

"Governments should be making it easier for commuters to go green. For this to work, transit has to be affordable," Horwath said, suggesting the province should take on half of the operating cost of municipal transit systems.

Horwath said an NDP government would also implement rules to keep drivers at least one metre away from cyclists in traffic.

"New Democrats will create a province-wide fund for investments in bike lanes, in bike storage facilities, bicycle tourism and a number of other initiatives."

Horwath's cycling strategy announcement comes one day after the Ontario Medical Association called on the province to establish policies to promote cycling.

The association's report called for new drivers to be tested on how they react to bicycles on the road. The OMA said Queen's Park needs to help improve bike lanes in major cities and on rural roads.

Horwath said her party's energy policy would see coal plants brought offline by 2014 and replaced by 10,700 megawatts of new renewable energy by 2018.

"We won't make the mistake of building any new nuclear power plants and we will seriously evaluate any future refurbishment projects," she added.