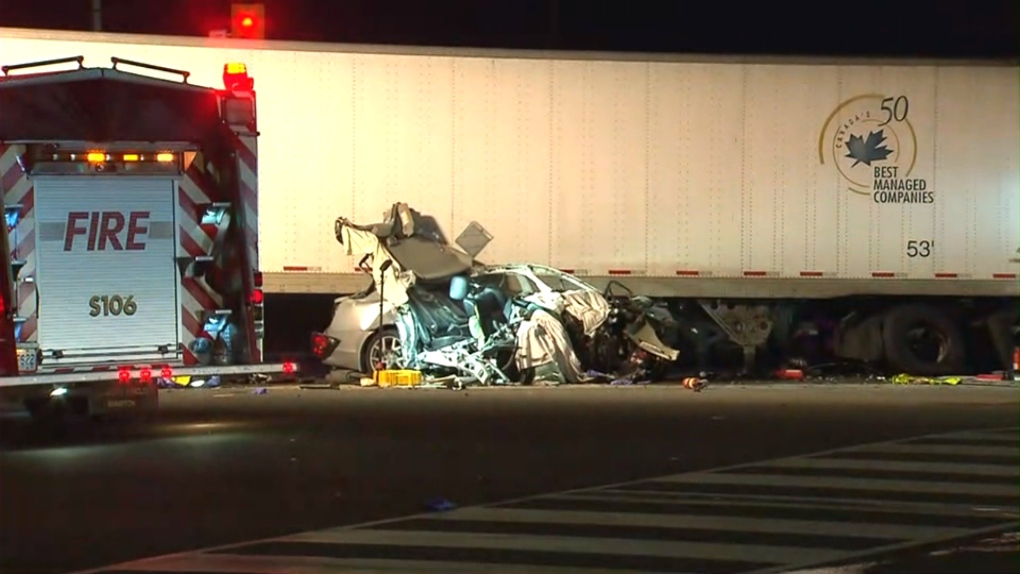 A damaged car is shown following a crash on Dixie Road that left a man and a woman dead on Thursday, Oct. 13, 2016.

A man and a woman are dead following what police described as a horrific crash in Mississauga Thursday evening.

It happened on Dixie Road at Aerowood Drive at around 7:30 p.m.

According to preliminary information provided by police, a car carrying three people went underneath a tractor trailer.

“All three occupants were required to be extricated from the vehicle,” Peel police Const. Mark Fischer told CP24 in an update from the scene.

A 20-year-old female passenger travelling in the car was pronounced dead on scene.

The driver, a 22-year-old Brampton man, was found without vital signs at the scene, police said. He was rushed to hospital where he later died.

A 21-year-old Toronto man travelling in the front passenger seat was transported to hospital with serious injuries.

A man who witnessed the incident said the car passed him at a “very high speed” prior to the crash.

He said the car hit the tractor trailer as the truck was making a left turn.

“(The car) plowed right into the back of the semi, flipped up, and then rotated, and then came back down facing the opposite direction,” Steve Joseph described.

“There was a plume of flame that billowed out of the engine compartment and reached pretty much to the top of the trailer.”

Joseph said he and other bystanders tried to rescue those trapped in the car following the crash.

“The other fellows who came to help brought some fire extinguishers with them and were putting out the fire,” he said. “They got it under control within a couple of minutes.”

Fischer said police are currently speaking with witnesses and the driver of the truck.

Dixie Road is currently closed from Highway 401 to Matheson Boulevard.

The closure is expected to last several hours, Fischer said.