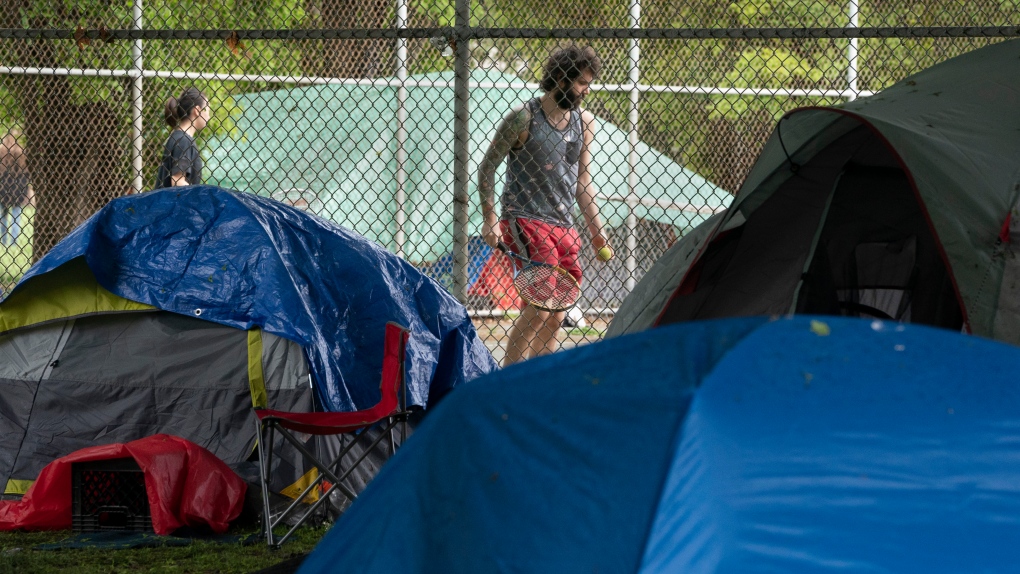 Tennis players play on courts next to the tent encampment at Moss Park in Toronto on Friday, May 29, 2020. THE CANADIAN PRESS/Frank Gunn

TORONTO -- A Toronto bylaw banning tents and camping in city parks should be declared unconstitutional given the COVID-19 pandemic, a group of homeless people and activist organizations argue in a new court application.

The untested application, filed in Superior Court this week, asserts that city threats to evict them violates their rights and demands a halt to any attempts to remove them from the parks.

Among other things, the bylaw prohibits people from being in, camping or living in parks after midnight. While enforcement provisions require 72 hours notice before an eviction, the city threatened to kick them out last week within 24 hours.

"The applicants view their ability to erect a tent or shelter within their community and to store their essential belongings as integral to their ability to safely shelter in place in the midst of a global pandemic so long as they are homeless," they say.

According to the urgent filing, the bylaw prevents the homeless from "engaging in essential life-sustaining activities" in public places. Forcing them into communal indoor spaces puts them at risk, they say.

"Depriving homeless people of the ability to provide themselves with safe, warm, dry shelter in public spaces in Toronto exposes the applicants and other homeless individuals to additional health and safety risks," they say. "It also causes serious state-imposed stress." 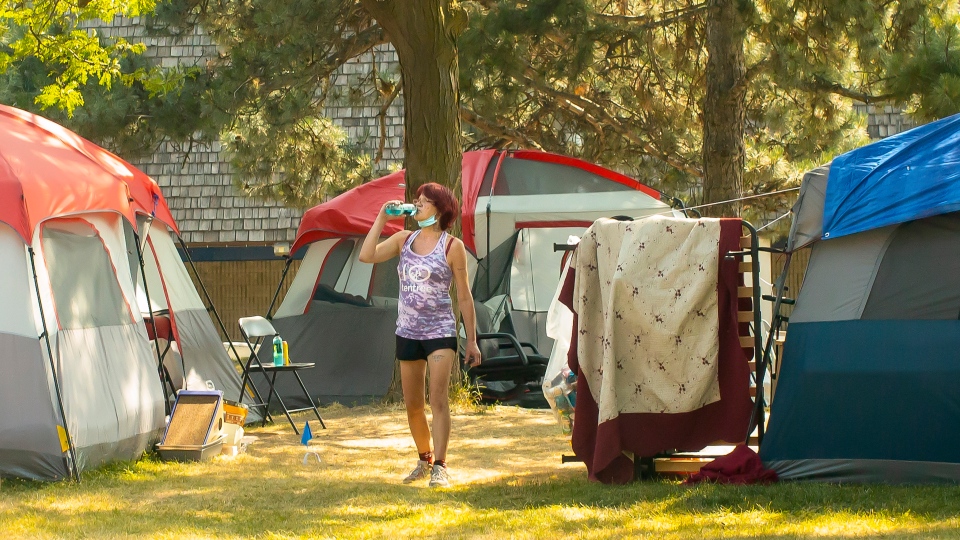 A city spokesman said on Tuesday it was reviewing the application. Brad Ross said evictions had been put on hold in the interim, but said encampments still present safety risks.

In addition, he said, the city had permanently housed more than 1,300 homeless people since mid-March. It has also moved at least 550 others from 43 encampments to inside safe spaces such as interim housing, hotels and shelter, he added.

According to the applicants, at least 630 people in the city's shelter and respite system have been infected with SARS-CoV-2, the virus that causes COVID-19. More than three-dozen outbreaks have occurred in shelter sites and the issue is the subject of a separate court challenge, the filing states.

The more than a dozen applicants had put up tents or other shelters in various city parks -- Moss Park and Allan Lamport Park for example -- for protection from the elements, privacy, and to store personal belongings. Some have been in the parks since March, when the province and city declared states of emergency due to the global pandemic.

City staff have offered to house them in hotels or other temporary facilities but they have resisted on the grounds they feel unsafe in an indoor communal setting, where physical distancing is difficult.

"The location of many of these spaces is often inaccessible and far from the communities where the applicants and other encampment residents live," the filing states. "They are far from necessary and familiar services such as overdose prevention sites, pharmacists, doctors, social and outreach workers."

They also argue rules in alternative settings, such as curfews and the demand for abstinence from substances, are "excessively paternalistic" and do not meet their needs.

Advocates note full shelters were already turning people away before the epidemic, a situation exacerbated by COVID-19. Many homeless people are members of disadvantaged groups, such as Black, Indigenous and the physically or mentally disabled.

"The parks bylaw has the effect of perpetuating or promoting the view that the homeless are less worthy of recognition or value as a human being or a member of Canadian society," the filing states.

This report by The Canadian Press was first published on July 20, 2020.