At Bathurst Lawn Memorial Park, a few dozen people stood in the shade and listened to Holocaust survivor Franka Kon. The Holocaust is widely regarded as the greatest example of Jewish suffering and despite the decades that have passed, Kon has vivid memories.

They include the first thing she saw as she arrived at Auschwitz on board a cattle car and looked out the tiny window.

“A nice looking guy, I still remember, made to me like this.” 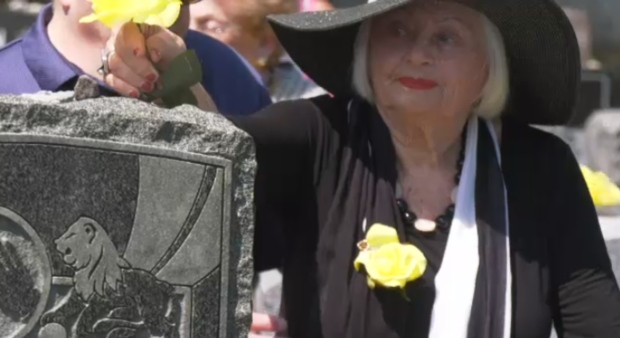 At that point, Kon lifted her right hand and traced her index finger in a motion as if to slit her throat.

She says she was scared, but didn’t want to tell the others travelling with her. And when she ran into an old friend from her hometown of Łódź, Poland, she realized what was happening.

“And at night, the fire was coming from the chimney,” Kon said her friend told her. “Do you see, your mothers, your fathers, everybody’s burning there. That’s the crematorium,” she said.

When Kon arrived at Auschwitz she didn’t get tattooed with a number.

“They didn’t have time to make numbers, because they were too busy killing,” she said.

Because she didn’t have a number, a fellow prisoner at the death camp told Kon: “If you are lucky, and going to live after Auschwitz, maybe you should tell the whole world.”

Now in Kon’s ongoing quest to make sure no one ever forgets about the horrors of the Holocaust, she started the Yellow Rose Project.

Today she was wearing a bright yellow rose on her chest and brought a basket of them for her friends to place on the top of loved one’s tombstones.

Kon chose the yellow rose to counter the yellow Star of David the Nazis forced Jews to wear during the occupation.

It was an emotional scene in the cemetery, as people carried the roses between tombstones. Some were crying, others prayed. Most had long stares on their faces as they remembered their lost loved ones.

Rabbi Elliott Diamond was at the ceremony. He said with more Holocaust deniers these days, as well as the further we get from the genocide, Kon’s stories have even more importance. 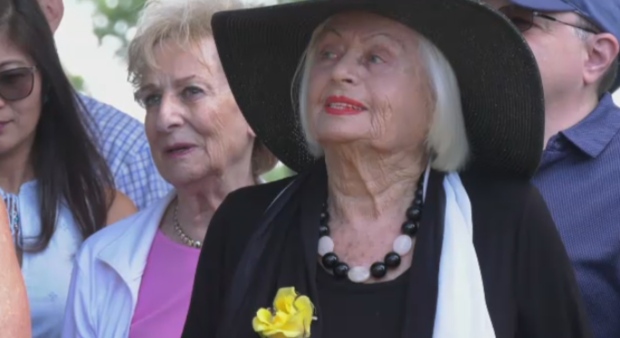 Franka Kon, 97, spoke of the horrors of the Holocaust today. (Nick Dixon)

Rabbi Diamond says with Kon sharing her horror stories, it will help strengthen the continuing fight against anti-Semitism.

“To be amongst a new generation that’s coming today and saying, we won’t forget. That’s strong, it’s powerful, it’s hopeful.

For Kon, her terrifying experiences as a teen are always present.

“I cannot forget. Not in happy occasions, not in sad. We are always in Auschwitz. It’s liked baked into us, that Auschwitz.”

And as her community remembers that tragedy among many in Jewish history, there is hope that by sharing the stories, that history won’t repeat itself.

Tisha b’av stared at sundown on Saturday and ends at sundown on Sunday. It’s the second most important fast day on the Jewish calendar, behind Yom Kippur.