TORONTO -- Yorkdale Mall was filled with people and packages Friday on what experts say was the busiest shopping day of the year.

“It’s going great, thank you very much,” Kate, who predicted she would be shopping for about eight hours, told CTV News Toronto. “I’m working out!”

“We’re not done yet, we’re still looking,” said Robina and Pauline. The friends said they had been shopping for three or four hours, but figured they’d be shopping for “another three.” 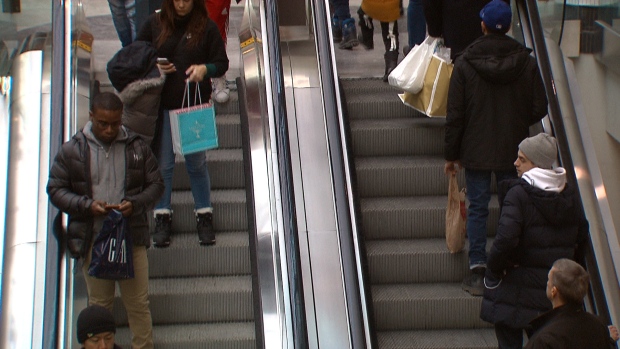 But while some people enjoyed their holiday shopping, it wasn’t such a joyous experience for others.

“So at this point in the year there’s really two types of purchases going on,” Malcolm Fowler, Chief Product and Partnership Officer at Moneris Canada said.

“We’re starting to see people buy things for holiday parties, for their friends and family. So housewares, groceries, those types of purchases are very high,” Fowler said.

“But, of course, the biggest purchasing today is those last-minute gifts.”

We predict the busiest time of the #BusiestShoppingDay will be around 2pm ET today, when we expect to process more than 600 transactions per second! Tune in to @CTVToronto News at Noon to hear more from Malcolm. pic.twitter.com/OmsFPLLrod

At Yorkdale Mall, staff predicts that Saturday Dec. 21 will be their busiest day of the year, with more than 100,000 people expected to walk through the doors.

Still, shoppers like Eric said shopping on Friday was busy enough for them.

“It’s been real packed. We came here yesterday and it was kind of empty, but we’re back again today because we didn’t get all our items. It’s been hard.”

And while it won’t be quite as busy as the 20th, across Canada, Moneris predicts stores will still be doing brisk business on the last weekend leading up to Christmas.