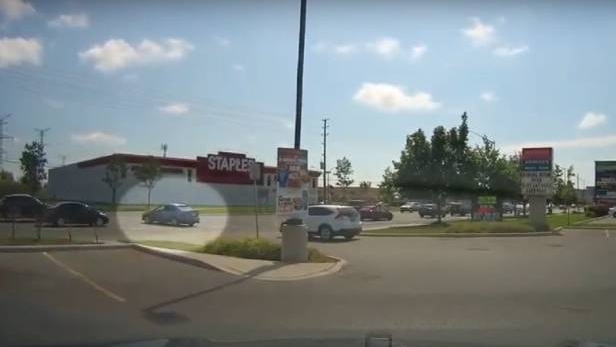 A vehicle involved in a hit-and-run collision in Markham on Aug. 15 is shown.

TORONTO -- Police have released new video footage that shows a vehicle slamming into the side of a SUV in Markham over the weekend and then fleeing the scene.

The hit-and-run took place near Markham Road and 14th Avenue at around noon on Saturday.

In the 16-second vide released by police on Monday, the suspect vehicle can be seen leaving a parking lot and turning left onto Markham Road.

The vehicle then clips a moving Jeep Cherokee while completing the turn, causing it to roll onto its roof.

Police say that the suspect vehicle, described as grey four-door car, did briefly come to a stop after the accident but then left the scene.

The driver of the Jeep Cherokee sustained minor injuries in the crash.

Police say that they are encouraging anyone who may have been driving in the area with dash cams to review their footage.