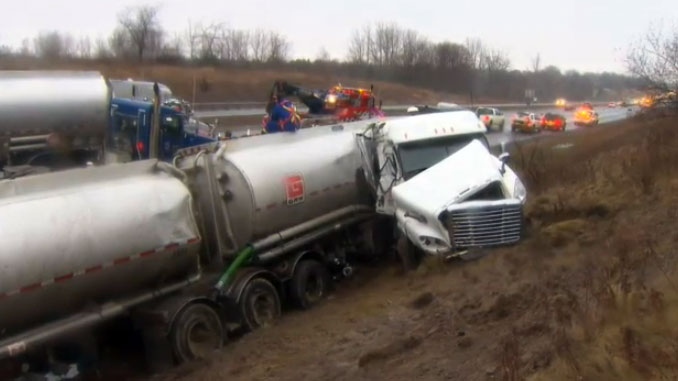 Two eastbound lanes of Highway 401 in Newcastle have been temporarily re-opened to accommodate rush-hour traffic after a tanker truck crashed and spilled approximately 20,000 litres of fuel early Tuesday morning.

A tractor-trailer hauling diesel fuel hit an overpass on the 401 near Highway 115, at approximately 1:30 a.m. The truck rolled into a ditch, and the impact of the crash broke the tanks.

Police on scene estimated that approximately 20,000 litres of fuel spilled onto the road, ditch, and a nearby creek.

The 62-year-old driver suffered minor injuries, and is expected to face a careless driving charge.

After the incident, all eastbound 401 lanes were temporarily closed from Highway 115 to Mill Street.

Two lanes have since been reopened to allow rush-hour traffic to pass through.

Those lanes are expected to close later this evening, and eastbound traffic will be restricted to one lane "for the next few days," an OPP spokesperson tweeted shortly before 2:15 p.m.

Hours after the collision, road crews were still cleaning up the spill and debris from the truck.

Ministry of Transportation officials will also investigate the scene, and will evaluate how much damage was done to the bridge hit by the driver.