Emergency crews throughout the Greater Toronto and Hamilton Area are responding to numerous reports of power outages, downed wires, and flying debris due to a windstorm that has hit southern Ontario.

Environment Canada had issued a wind warning for the GTA, saying the region could see wind gusts of up to 90 kilometres, although recent reports suggested winds were even stronger than that.

By Wednesday afternoon, high winds started to take their toll.

Toronto police say that large amounts of debris are being blown away around Church Street and Bloor Street, hitting neighbouring windows. They also say that a large piece of a roof has flown off a building around Spadina Avenue and College Street. The debris hit vehicles, but there were no injuries.

A crane has collapsed around the area of Erin Mills and Eglinton West in Mississauga. Photos show a badly damaged crane, with one part leaning on the side of a building under construction. Mississauga Fire Chief Tim Beckett said that no one was injured and that the adjacent building is not in any danger.

Other incidents reported include a large pane of glass that fell from a building at Liberty and Pirandello streets in Liberty Village and a large board containing nails that fell to the ground from a building in the Yonge and Grenville streets area.

The area near Yonge Street and Eglinton Avenue was closed for a few hours after high winds knocked over fences and a portable toilet used at a construction site.

A number of trees and large branches have been knocked over, including a large, thick-trunked tree that collapsed in front of a residence near Bathurst and Eglinton and a tree that fell over in the school yard of John English School in Etobicoke near Royal York Road and Mimico Ave.

Durham Regional Police released a warning to residents not to approach their own headquarters in Whitby, as around 2:30 p.m. the extreme high winds caused what they say was “roofing debris hazards”. The situation was rectified around 5 p.m.

“Engineers have checked all roofing and venting and confirmed they are secure,” a news release said.

The southbound lanes of the highway have since reopened after being closed for about two hours for a police investigation. OPP say there are icy conditions throughout the area with strong winds and drifting snow.

Thousands of hydro customers without power

According to a media bulletin sent out by Toronto Hydro Wednesday afternoon, approximately 21,400 customers were being affected by scattered power outages at about 5 p.m. By 8 p.m., Toronto Hydro had reduced that number to 8,000.

“We are prioritizing calls related to public safety—wires down, tree branches on wires, ect.,” the bulletin said.

Crews have been dispatched throughout the GTA. In Toronto, the public is being advised to stay at least 10 meters away from downed wires and report the incident to both Toronto Hydro and the police.

Matthew Pegg, Chief of Toronto Fire Services, says there were 34 active incidents as of 4 p.m. as a result of the heavy winds, including downed wires and transformer fires.

“The most important message that I would like to get out is that if you encounter downed wires you need to stay at least 10 metres away from them and call us for help. There is a significant hazard if they are energized on the ground,” he said in a phone call to CP24. “This is a unique weather event so we are watching carefully. But we are prepared. We will watch, we will monitor and obviously if there is assistance required we will be there to do that.”

Pegg said that the gusts have reached about 100 kilometres an hour in parts of the city.

“These are very unique wind speeds. It is about paying attention and being aware of what is going on around you,” he said.

Ontario Provincial Police Sgt. Kerry Schmidt is warning trucks and large vehicles to be careful on large bridges, especially the Burlington Skyway. Vehicles are encouraged to use alternative routes.

The winds are expected to calm down by late Wednesday evening, diminishing to about 20 or 40 kilometres an hour.

Some regions to the west of the city could see flurries. Environment Canada says Toronto has about a 30 per cent chance of seeing snow.

The low tonight is expected to be -4. 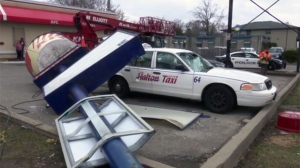