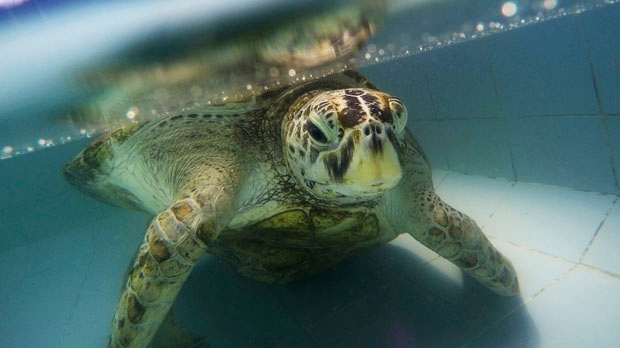 TORONTO -- Heavy rain in Ontario this summer might be a nuisance for residents, but it's proving to be fatal for the province's turtles.

A turtle conservation group in Ontario said Monday it has already taken in 620 injured turtles this year, twice the amount of cases it had in all of last year.

"It's been incredibly overwhelming," said Donnell Gasbarrini, a program manager at the Ontario Turtle Conservation Centre, an organization based in Peterborough with locations throughout Ontario.

Gasbarrini said the heavy rain this summer has flooded areas where turtles generally nest, causing the reptiles to travel more than usual. The extra movement means that more turtles are being struck by cars as they cross roadways, she said.

Ontario has eight different species of turtles, and seven of them are considered at risk. Of those, three are endangered.

Turtles already face immense challenges to their survival like poachers and new roads that run through wetlands, she said.

This year, many turtles were also taken to the centre's various locations because they ventured out during warm spells in the middle of winter, but couldn't survive in the open when it became cold again.

Because turtles take an unusually long time to reach maturity -- up to 20 years -- the loss of one male can be devastating to their population, she said.

Gasbarrini said the spike in injuries and deaths could spell long-term trouble for the province's turtle population.

"It's very difficult because we've run out of space, we are for sure beyond capacity," she said.

Most of the turtles treated at the conservation centre have been struck by a car and their extensive injuries take over a year to heal, she said, adding no other facility is equipped to take them.

Those who encounter turtles on a road should pick it up or coax it with a shovel to the shoulder, making sure to move the turtle in the direction it's facing since the reptiles sometimes travel for kilometres to their destination, she said.

She warned to take extra care with snapping turtles and make sure to grab them from the back of the shell.