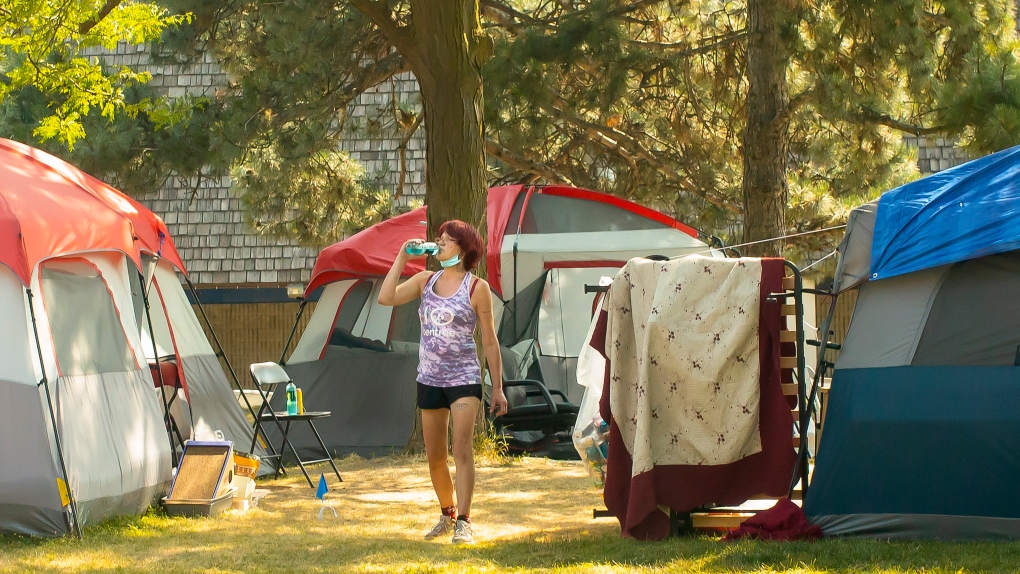 Nancy Fisher is photographed at a homeless encampment in Toronto on Friday, July 10, 2020. THE CANADIAN PRESS/Chris Young

TORONTO -- Mark Baratta sips a cold Gatorade outside his tent under the shade of a tree at a large encampment in Toronto's west end, the heat making his blue T-shirt cling to his skin.

"I'm surviving," Baratta says as sweat trickles down his face. "That's all it is -- just surviving, not living."

A recent heat wave is the latest challenge facing those living on the streets of Canada's most populous city, following COVID-19 outbreaks in the shelter system.

Environment Canada has issued several heat warnings for parts of Ontario in recent weeks, and daytime highs in Toronto have been in the 30s for more than a week straight.

"The heat has gotten people so aggravated and with COVID-19 still going on, people can only handle so much," Baratta says.

"There is a hell of a lot more aggression, arguments and fights out here."

Several dozen tents, including Baratta's, dot the grounds of Lamport Stadium, near a 24-hour respite centre. The "tent city," as some living there call it, has bloomed into one of the larger homeless encampments that have sprung up across Toronto during the COVID-19 pandemic.

The pandemic has forced a massive reorganization of those living on the streets and in the city's shelters and respites. Many left such congregate settings for fear of catching the novel coronavirus, setting up camps outdoors.

May of the usual supports for the homeless -- including bathrooms in coffee shops and restaurants, and drop-in centres --have collapsed since the province went into lockdown. While many businesses have since reopened, many public restrooms remain shuttered.

"The washrooms are a huge problem," Baratta says. "That is really getting to everyone. It's uncivilized to go to the washroom outside. That takes away your dignity."

The city has opened up washrooms in Lamport Stadium, but only for several hours per day and only five days a week. It puts those like Baratta into a tough spot.

Baratta's sister, Nancy Fisher, found herself living in a tent recently after her partner kicked her out of their home. She said she also lost her job as a harm-reduction worker because she was exposed to COVID-19. Her daughter had a drug relapse and caught the novel coronavirus, so Fisher said she had to help take care of her two-month-old grandchild. 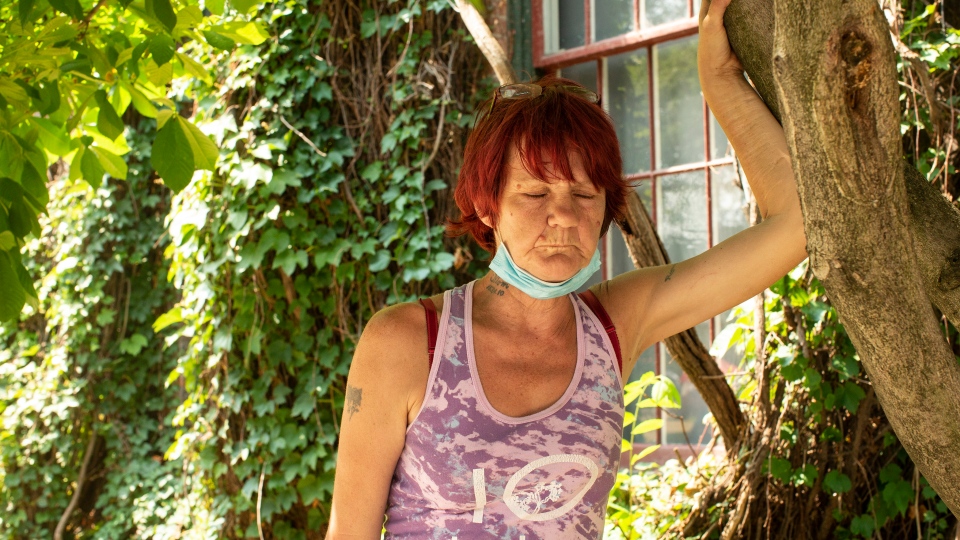 Now she stays at the nearby respite centre, which has cots, washrooms and air conditioning. But the rules, including the four-times per day she has to check in there, are a bit onerous, she says.

That has her thinking of a return to the encampment, despite some problems there.

"The encampment is very chaotic right now," she says, looking at a man who has been yelling for about 15 minutes.

"I'm hoping for housing. We have to get people out of these tents and into transitional housing."

The city has been buying and leasing hotels and apartment buildings as it works through a massive relocation program due to the pandemic. As of Monday, the city said it has moved more than 3,200 people into 33 new shelter sites as well as into both interim and permanent housing placements.

Since the pandemic began, 628 people have tested positive for COVID-19 in cases linked to shelter outbreaks, according to city data. Four of those people have died, and there are 28 active cases.

Advocates say the city should be doing much more to help the vulnerable living on the streets, especially during a heat wave.

"The city's response is abysmal for the most basic public health measures, which includes water, toilets and garbage pickup," says Cathy Crowe, a street nurse.

"We know the heat can be deadly."

Brad Ross, the city's spokesman, says there are 15 emergency cooling centres in the city, and outreach staffers are providing water to the homeless population.

There are 55 respite centres across the city where the homeless can go "for showers, food and relief from the heat," Ross says.

The city said it's not aware of any heat-related deaths, including among the homeless population.

Despite the troubles, Baratta is thankful for the little things, including a cooler stocked with Gatorade, other beverages and ice.

Several local restaurants and non-profits also drop by with food and water every day, he says, and there is always water available from the staff at the nearby respite centre.

And the local ice-making company, The Iceman, drops off ice every day, he says.

"Lots of water and drinks over here," he yells to his neighbours with a broad smile.