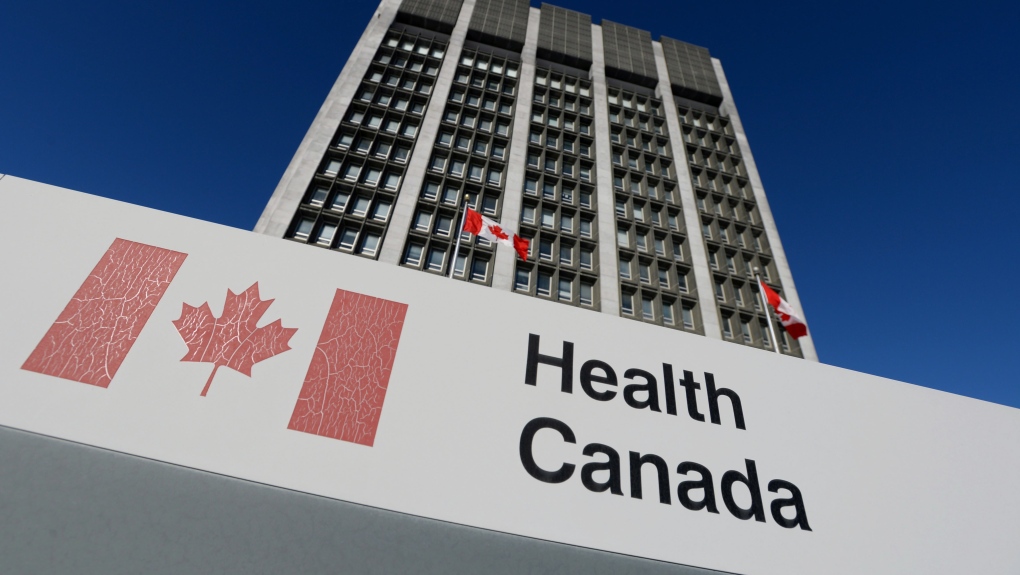 A sign is displayed in front of Health Canada's headquarters in Ottawa. (The Canadian Press/Sean Kilpatrick)

TORONTO -- Women who want to use the abortion pill Mifegymiso can now take it farther along in their pregnancy, Health Canada said Tuesday in announcing changes to how the medication is prescribed and dispensed.

The federal department said the abortion pill can now be prescribed up to nine weeks into a pregnancy, rather than the previous limit of seven weeks.

As well, the drug that was initially known as RU-486 can be dispensed directly to patients by a pharmacist or a prescribing health professional, including nurse practitioners in certain jurisdictions.

"What hasn't changed is that the product itself is the same product," Dr. Supriya Sharma, chief medical adviser for Health Canada, said in an interview from Ottawa.

"So the formulation is the same, it's still a combination product of two medications, it's still taken in the same way."

Mifegymiso is a combination of two oral drugs, mifepristone and misoprostol, which are taken individually, separated by 24 to 48 hours.

Action Canada for Sexual Health and Rights, one of several organizations that has been calling for more accessible abortion in Canada, lauded the changes.

"There is decades worth of evidence from use in over 60 countries proving how safe and effective this medication is, yet Mifegymiso is more regulated than controlled substances in Canada," Sandeep Prasad, executive director of Action Canada, said in a statement.

Prasad said Mifegymiso has the potential to significantly improve access to abortion, especially for women in rural and remote areas who are forced to travel hundreds, sometimes thousands of kilometres, to find an abortion provider.

"Abortion access shouldn't depend on your postal code or income bracket," he said. "It's the responsibility of all levels of government to address two-tiered access."

Health Canada said women will no longer be required to provide written consent to take Mifegymiso, nor will health professionals need to register with the drug's distributor, Celopharma, to prescribe or dispense it.

While medical professionals should have appropriate knowledge about the drug before prescribing it, the federal department said they will no longer be required to first complete a formal education program in its use.

However, one carry-over from the previous version of Health Canada's prescribing guidelines is the mandatory requirement that women have an ultrasound to ensure they don't have an ectopic pregnancy -- one outside the uterus -- and an assessment of the length of gestation.

Prasad said that could lead to serious delays in administering Mifegymiso, especially in regions where ultrasound services are limited, accessible only in hospitals or burdened by long waiting lists.

But Sharma said an ultrasound is the only reliable way to detect an ectopic pregnancy.

"That hasn't changed ... that's why there's a concern there," she said. "(Mifegymiso) really shouldn't be used by women who have ectopic pregnancies, and they can be at a very high risk of very serious, potentially fatal adverse events like bleeding or infection."

"It's very important to come in for a followup between seven and 14 days after you take the medication to make sure the pregnancy has indeed terminated and to look out for any of the side-effects," Sharma said.

In some cases, surgical intervention may be needed if termination hasn't been completed.

Health Canada originally approved Mifegymiso in July 2015. The medication became available to Canadian women in January and its $350-$400 cost is now covered by some but not all provinces.

Phil Emberley, director of practice advancement and research at the Canadian Pharmacists Association, said his organization is pleased that Health Canada has lifted many of the restrictions that limited access to the abortion pill.

He said pharmacists are now allowed to fill a health provider's prescription for Mifegymiso and dispense it directly to the patient, instead of having to send it to the physician for administration, as was previously the case.

Still, Emberley said access could be further improved for women across the country if all the provinces and territories were to cover the drug's cost. Currently, the cost of the abortion pill is reimbursed to patients in Alberta, Ontario, Quebec, New Brunswick and Nova Scotia.

"Those who are not able to pay for it are then basically forced to go to the surgical option," he said. "So having a medical option available to women we thought was a very big plus."