Hamilton Tiger-Cats to get new stadium 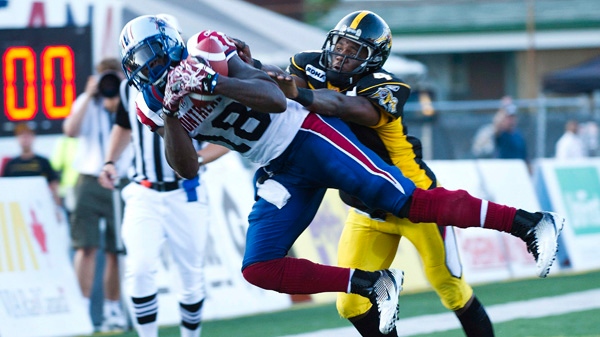 There's been a change of plans for Ivor Wynne Stadium.

Instead of renovating the home of the Hamilton Tiger-Cats and the 2015 Pan American Games venue for soccer, the stadium will be completely rebuilt.

The original plan involved replacing the south stand and renovating the north stand to bring it up to code. But city officials and the Tiger-Cats approached the Pan Am group about rebuilding the stadium and after examination it was found that the plan could be completed under the previously agreed upon budget.

"Sometimes the cost of renovating is more than the cost of taking the house down and rebuilding," chief executive officer of the organizing committee for the Pan Am games Ian Troop said. "You never know what you get into when you start renovating. That was part of the thinking that led us, as we looked at our costs, to say we think that the north stand can be included within the same budget.

"Hamilton's getting a better, a more complete facility for the money we've talked about."

The design of the stadium hasn't been established yet. Builders will compete for the chance to design and build the facility. The capacity of the new stadium will be reduced with the exact number still not released yet.

Last January the Ontario government stepped in with about $22.5 million to cover a funding gap in the $152-million project. Hamilton's share is about $54 million but Troop said more money could come into the project when the private sector gets involved.

"We haven't yet gone to market. So we haven't yet got the competitive market place helping us either so we'll see if we can do even better when we go to market," Troop said.

Troop said as far as he knew the main reason for the decision to rebuild was to provide spectators with a better game-experience.

"Our understanding is that there was a desire to make sure that everybody in the stadium had the same level of experience and there was a concern that a reconditioned north stand wouldn't provide the same kind of experience as a rebuilt south stand," Troop said.

The challenge for all the parties involved is to get the stadium ready as soon as possible for CFL action and so test events can take place in preparation for the Pan Am Games.

The next deadline for Troop is to get the request for proposal (RFP) submitted to Infrastructure Ontario by Sept. 15. If all goes to plan the construction contract would be awarded next summer and work would start after the Tiger-Cats finish the 2012 CFL season. By mid 2014 Troop wants the stadium ready to run test events for the Pan Am games and the Tiger-Cats would start the season in there new home.

"You want to make sure you've had a chance to have as close as you can to games experience in the venues before you go live the year after in '15," Troop said. "It allows you also to get your technical officials acclimatized to the facility and you want to make sure there's no surprises when it comes games time in '15."

It has not been determined yet where the Tiger-Cats will play while their home is under construction. But once the stadium is complete fans who held season tickets in 2012 will be able to retain their seats at the same price for the first season in the new stadium in 2014.

"The new stadium will be a facility that our team, our fans, our partners and the Hamilton community will be proud of for generations to come," said Tiger-Cats owner Bob Young. "As we prepare to begin playing in the new facility in a couple of years, the team and I would like to reward our most loyal supporters."

The city of Hamilton will also be able to boast a facility with the capabilities to host world class soccer events.

"One of the legacy benefits of rebuilding Ivor Wynne is that you're able to slightly expand the field so it is now able to put on FIFA quality soccer events, which they couldn't before because it was too tight," Troop said.