Wastewater sewage that has been spilling into the Hamilton Harbour for approximately 26 years is an “anomaly” incident and the environmental impacts will likely be “relatively small,” a city official says.

“Knowing that something like this could happen for that duration without us knowing about it doesn't make any of us feel good,” Director of Hamilton Water Nick Winters said at a news conference Wednesday morning.

The City of Hamilton announced Tuesday afternoon that it had discovered a sewage leak into the harbour in Lake Ontario while conducting work for another project.

The leak was discovered at the northeast corner of Wentworth Street North and Burlington Street East and has gone undetected since 1996, the city said.

Winters said the leak was caused by a contractor who accidentally created a hole in a combined sewage pipe while working on a watermain project.

“The issue of course is that there's a very large storm sewer behind me here underground that runs along Wentworth Street North and out to the harbourfront. And on the harborfront there’s a storm sewer outfall, so any flow from that pipe goes out to the harbour. That outfall’s submerged 100 per cent of the time…so there would have been nothing visible… that would have indicated to them that this spill was occurring over a period of time,” Winters said.

As a result, 39 properties have been flushing directly into a storm sewer leading into the harbour. The city initially reported yesterday that 50 properties were affected.

“We're talking about a fairly small neighborhood on the other side of Burlington Street. There is one industrial facility, Wentworth Metal, that discharges into the storm sewer. Other than that, it's all residential,” Winters said.

The city’s drinking water has not been affected and the overall risk to the public is "very low,” the city said.

Winters said it is believed that when the watermain project was being conducted, there was an addition made to create a hole in the combined sewer and into the storm sewer based on an inaccurate drawing of the project by engineers.

“It looks like the individuals involved in that project were mistakenly thinking that they were dealing with two storm sewers. So they're creating a connection from one storm sewer into another, which wouldn't have been a problem… Unfortunately, that's not the case,” Winters said. 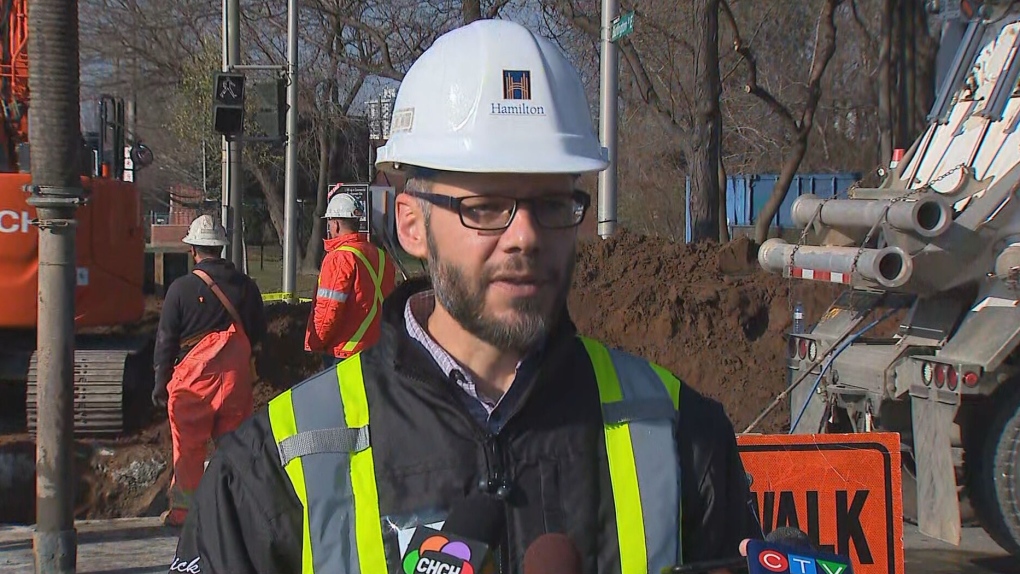 Director of Hamilton Water Nick Winters speaks at a news conference on Nov. 23, 2022.

It is not clear why the information in the drawing was incorrect.

Winters said there are programs that regularly inspect the city’s storm sewer system, which spans about 2,100 kilometres. But crews would not have noticed this leak based on their inspections, he said.

Winters added that would describe this incident as an “anomaly” that was only discovered due to some work that was being done in advance of maintenance being done in the area.

“Do we need to put in different programs to look for anomalies within our system? It would be difficult for me to stand in front of you and say that that's not the case,” he said.

Hamilton Mayor Andrea Horwath has asked the city auditor to start a preliminary investigation into the pipe leak.

Ever since the discovery, the city said crews started working immediately to rectify the situation.

Yesterday afternoon, crews brought a truck to the site to vacuum up the discharge from the combined sewer pipe to prevent it from getting into the storm sewer.

Wednesday morning, crews began fixing the problem by reconnecting the sewer into the city’s Western Sanitary interceptor, which is a massive sanitary sewer that runs under Burlington Street all the way down to the Woodward Avenue Wastewater Treatment Plant.

“We believe that this is a permanent fix and it's going to resolve this but we do need to do some further engineering work, some hydraulic modeling, just to make sure the impacts of this new connection that didn't exist previously aren't going to result in any flooding risks during wet weather events for the neighborhoods that serviced by this pipe,” Winters said.

ENVIRONMENTAL IMPACTS EXPECTED TO BE SMALL

It’s unclear how much sewage has been filling into the harbour but officials say they’ll have preliminary results on that tomorrow.

Winters said the primary concern is the environmental impacts, but he expects that to be minimal.

“From an environmental perspective, and I don't say this to try and minimize this event, I think we're going to find that the impacts are relatively small, because of the volumes related to dilution here,” he said.

The leak has prompted some concerns that the city is not doing enough to manage its water reservoirs, particularly after the discovery of a 24-billion-litre sewage leak in Chedoke Creek in July 2018.

However, Winters reassured residents that this is “not the Chedoke spill.”

“What we're talking about that’s happened here is something that never should have happened. This is an intervention that was made in the sewer system back in the 90s that would not have made its way onto an inventory for our maintenance team to inspect on a regular basis.”

“Because the team that was thinking this was a storm sewer discharging into another storm sewer, that happens all over the city. We don't go out of our way to inspect those connections just to make sure that nothing is going wrong,” he added.

Marit Stiles is expected to be confirmed as the new leader of the Ontario NDP today.

China balloon: Many questions about suspected spy in the sky

A train derailment and resulting large fire prompted an evacuation order and a declaration of a state of emergency in an Ohio village near the Pennsylvania state line on Friday night, covering the area in billows of smoke lit orange by the flames below.