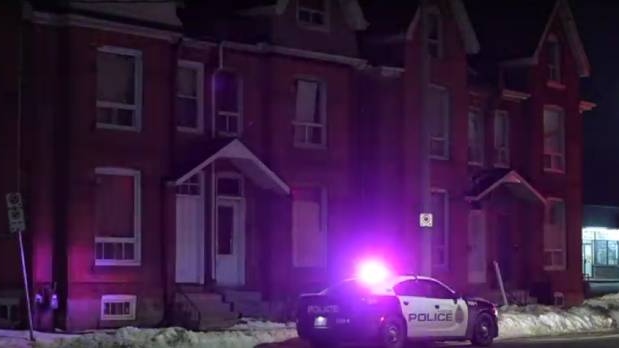 A Hamilton police cruiser is shown at the scene of a suspicious circumstances investigation on Wellington Street North early Wednesday morning. (Andrew Collins)

TORONTO -- Hamilton police say that they are investigating an unconfirmed report regarding a baby being buried at a residence and have taken two people into custody as part of their probe.

Police say that they responded to a residence on Wellington Street North just after midnight.

They say that they are “unable to confirm the accuracy of the report” at this time but continue to investigate.

The residence where the investigation is taking place appears to be abandoned with its windows boarded up.

One neighbour who spoke with CTV News Toronto on Wednesday said that squatters often use the residence and that police are frequently called in.

“I am not surprised. Nothing would surprise me with those two houses,” Angela Marcy said regarding the police investigation.

Police say that they expect to be at the location for “several days.”

It remains unclear what charges, if any, the two people taken into custody will face.

“Anyone with information that could assist police are asked to call Detective Ebert at 905-546-4167,” police said in a news release.

Officers with both the Hamilton police Major Crimes Unit are leading the investigation.