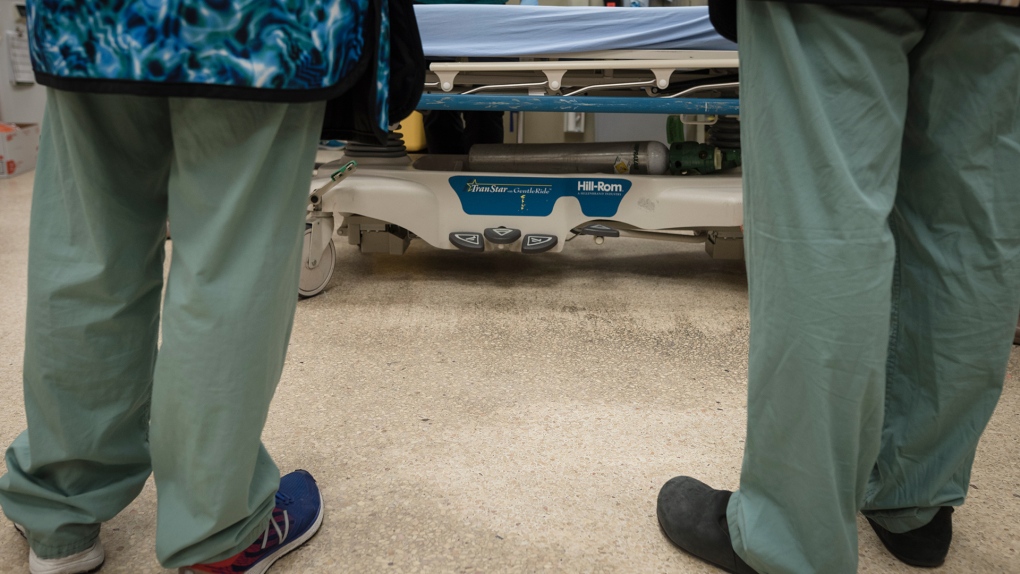 A medical bed is photographed in the trauma bay during simulation training at St. Michael's Hospital in Toronto on Tuesday, August 13, 2019. THE CANADIAN PRESS/ Tijana Martin

TORONTO -- Hamilton General Hospital had to cancel all cardiac surgeries for an entire day last week as it scrambled to free up resources to care for COVID-19 patients in its intensive care unit.

The hospital said in a news release that seven of its eight extracorporeal membrane oxygenation (ECMO) machines were being used to help unvaccinated COVID-19 patients breathe on Sept. 10, forcing hospital administrators to make the difficult decision to cancel a day’s worth of planned procedures.

The machines essentially take over the work of the heart and lungs by pulling blood from the body and oxygenating it.

They are increasingly used to treat the sickest COVID-19 patients but they are also required by those undergoing cardiac surgeries, hence the dilemma.

“Those choosing to be unvaccinated are endangering others and themselves – they don’t need to be sick and in hospital,” Dr. Craig Ainsworth, Director of the Cardiac Care Unit at Hamilton General Hospital, said in the release. “My colleagues and I are fully vaccinated, we support hospital policy and expect that everyone will follow the science. It’s the right thing to do.”

Scheduled surgeries and procedures were largely put on hold during the third wave of the pandemic but were allowed to resume in June as case counts declined.

As of Monday, there were 189 COVID-19 patients in intensive care units across Ontario. At Hamilton General there were 38 patients with confirmed cases of COVID-19, including 14 in the ICU.

“Sending home a 50-year-old patient with a weak heart and disease that carries high risk of sudden death is wrong. But we are starting to have no choice,” Dr. Richard Whitlock, a cardiac surgeon for Hamilton Health Sciences, said in a message posted to Twitter. “Our centre is now focusing on the sickest of COVID, those requiring ECMO. This proportion seems higher this wave as we are very early into it and we have already almost reached the peak number that needed ECMO in the 3rd wave.”

Ontario’s Financial Accountability Office has previously projected that the cancelled surgery backlog will reach 419,200 procedures by the end of September.

It has said that it could take the province three-and-a-half years to clear the backlog and that is assuming that hospitals are able to operate at 111 per cent capacity going forward.