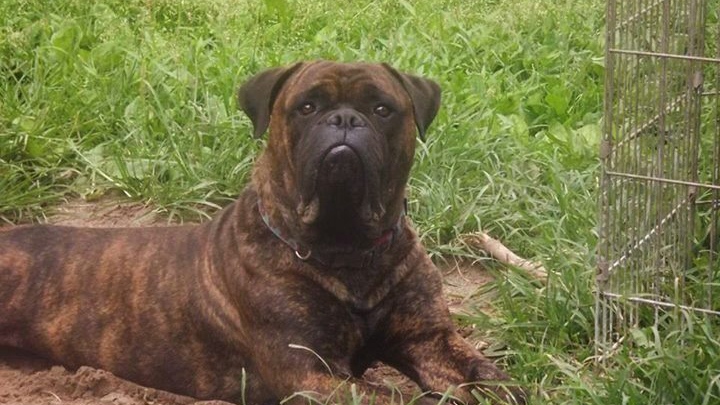 Mr. Satan is shown in this handout photo, was one of the two bull mastiffs involved in the fight with a raccoon after being picked up by animal services. (Paula Fancey /THE CANADIAN PRESS, Hand out)

Ontario wildlife officers will blitz parts of Hamilton in an effort to contain the first case of raccoon rabies in the province in nearly a decade after two dogs were exposed to the virus after a fight in the back of an animal services van.

Chris Davies, head of wildlife research with the Ministry of Natural Resources and Forestry, said a team of officers will drop rabies vaccine baits in farmland, greenspaces and ravines in Hamilton after a raccoon tested positive for the disease following the scrap with the two bull mastiffs.

Wildlife officers will walk the trails and greenspaces dropping the baits, and a helicopter will air-drop them across the vast farmlands of nearby Stoney Creek where the rabid raccoon was found, he said. They'll also airdrop the packets into Hamilton's ravines.

"We always take this seriously and we're pretty proud to have eliminated terrestrial rabies," Davies said. "Now it's back and we'll start again."

Davies said the strain is known as the South Atlantic Florida strain that came into Canada at Cornwall, Ont., in 1999. It has been detected in the province since September 2005, he said. It probably arrived in Canada thanks to an American raccoon who bummed a ride into Canada.

"We think it's most likely that it was a hitchhiker -- as in it came up on a truck from the United States," Davies said. "But to be honest, we'll probably never know for sure."

He said the ministry will also be monitoring the area, looking for roadkill to test for rabies to gauge if it's spread.

On Monday, a slew of government officials met to discuss the rare occurrence and the next steps.

The dogs' lives were spared over the weekend after the city placed them under strict quarantine on Friday as soon as it discovered the raccoon they'd scrapped with tested positive for rabies.

Paula Fancey, who owns the dogs -- Mr. Satan and Lexus -- said she cannot afford to board them in isolation for the recommended three to six months to ensure they are free of rabies.

"I still think the city should pay for boarding," Fancey said, adding that she and her daughter received rabies shots over the weekend. "Otherwise I will have to put them down."

Ann Lamanes, a city spokeswoman, said the dogs have been inoculated against the virus and will remain in the care of animal services for now.

Last Wednesday, an animal services officer picked up the dogs after they escaped their yard and placed them in cages in a van with a sick raccoon.

Somehow the raccoon and one of the dogs got loose from their cages and fought in the van, leading to injuries for both dogs. The raccoon was later euthanized and tested positive for rabies while the unvaccinated dogs were exposed to the virus due to the brawl.

The city says it's reviewing its protocols, namely the security of cages in its vehicles and whether wildlife should be transported in the same vans as domestic animals.

Hamilton public health and animal services officials are meeting with officials from the province's Ministry of Natural Resources and the Ministry of Health and Long-term Care to figure out a way forward.

Ontario instituted rabies control programs more than 20 years ago, and in the summer of 2015 distributed more than 100,000 baits containing rabies vaccine.

The vaccine is aimed at keeping raccoons in the province rabies-free by immunizing the animals in border areas due to the presence of raccoon rabies near the Ontario-New York State border. Provincial officials say the flavoured baits immunize most skunks, foxes and raccoons that eat them.

The city is asking residents to keep their pets' vaccines up-to-date and to notify them if they see a wild animal, such as a raccoon, acting strangely.

City officials in Toronto, with its large and sprawling raccoon population, say they've reviewed their animal control protocols in wake of the Hamilton case.

Generally, Attard said, they don't test sick raccoons for rabies as it is rare in the province and symptoms are similar to a more common, yet fatal disease: distemper.