Hamilton could lose bid to build Pan Am stadium 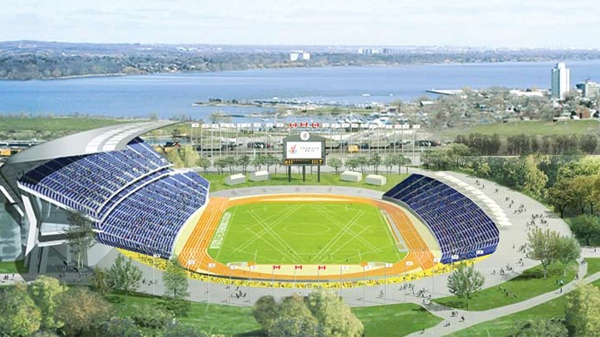 According to the Toronto 2015 Bid, the Pan American Stadium in Hamilton will be a new 15,000-seat stadium will include a leading-edge 400m running track with all the required areas for throwing and jumping disciplines.

TORONTO - Hamilton may lose a new multimillion-dollar stadium for the 2015 Pan American Games if it can't end the standoff over its location by July 8, Game organizers said Thursday.

The city and the owner of the CFL's Hamilton Tiger-Cats are at an impasse over the stadium's location, with Mayor Fred Eisenberger calling on Ontario Premier Dalton McGuinty to intervene if an agreement can't be reached by the deadline.

The city wants the stadium on West Harbour land as part of downtown redevelopment. But Ticats owner Bob Young wants it near a highway.

"This is an issue to be resolved in Hamilton by Hamiltonians, and we would like to let that decision be a local one," Garland said in a conference call. "I can't speak for the province either, but I would expect that would be their position."

A facilitator, Michael Fenn, has been brought in to find a way to break the impasse. But organizers will "have to be creative" if Hamilton doesn't work out, said CEO Ian Troop.

"We start looking at other options and exploring those possibilities, at least informally," he said. "Our focus is on trying to solve the problem in front of us, knowing that if we have to look at fallbacks, we'll do that."

Troop wouldn't say what other cities may be considered, only that the location would have to be in the Golden Horseshoe area that surrounds Toronto.

"There will be a process where we look where we think would make great sense, if there is a fallback," he said. "Where there would be good legacy, where there's good access to transportation, and those will be the criteria that we'll look at when and if we have to get to it."

Young called for a facilitator after the city rejected a 90-day moratorium on submitting the West Harbour stadium site to Toronto 2015. Young argues the site would limit the stadium's visibility, has insufficient parking and road access, and would be unpopular with nearby residents.

The Pan Am Games stadium would stage track and field in 2015, then be converted later for football and other sports. The federal and provincial governments are each kicking in $32 million for the stadium.

Newly minted Senator David Braley, who helped bring the Games to Ontario, will resign from the Toronto 2015 board when he takes his seat in the upper chamber. The federal government can appoint his replacement, Garland said.

"David has been an unmatched champion for these games, and I think it's fair to say that we would not be here today without him," Garland said.

Prime Minister Stephen Harper appointed Braley -- the single biggest donor from his 2004 Conservative party leadership campaign -- to the senate last week. The Hamilton businessman owns both the B.C. Lions and Toronto Argonauts of the CFL.

Chris Rudge, who recently resigned as CEO of the Canadian Olympic Committee, also left the board. The COC has appointed Walter Sieber as his replacement.

The Toronto 2015 organizing committee expects to have 25 full-time staff this fall to plan the Games, with a core leadership team of eight people. The successful candidates, including chief financial officer, will be announced over the next few weeks, Troop said.

The committee plans to have the brand strategy, plan and design for the Games by mid-summer, and to start marketing the Games at the end of August, he said. Three agencies will make their pitches next month.

The two-week Pan Am Games have a budget of $1.4 billion for the sporting event itself and $1 billion for an athletes' village.

The federal and provincial governments are each on the hook for some $500 million, while municipalities and private investors will pay the remaining $428.5 million.

The win was an important one for Toronto -- a city that has lost two Olympic bids -- and Hamilton, which also lost bids for two Commonwealth Games.