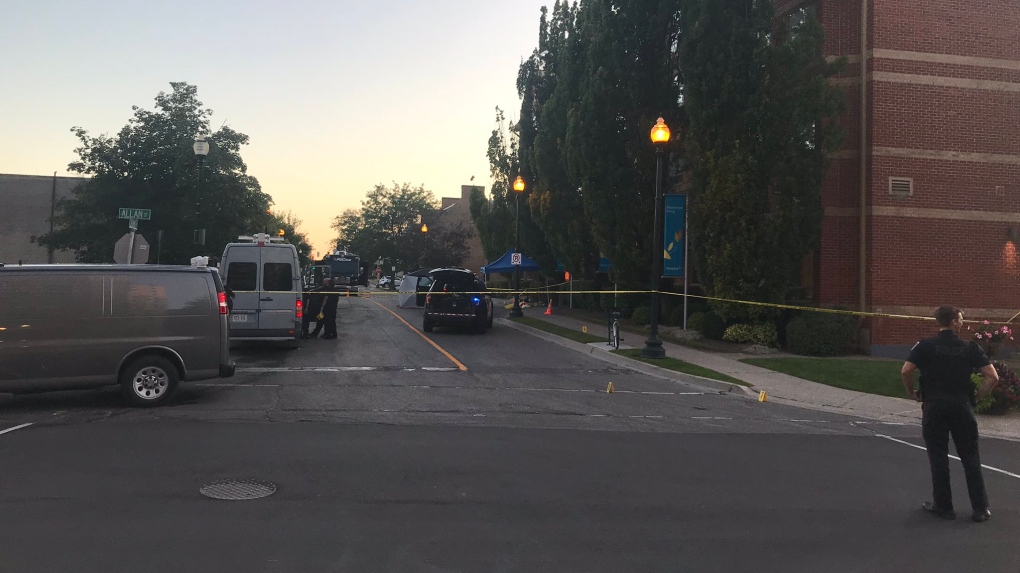 Halton police have blocked off the entrance to a retirement home in Oakville for investigation into a man's death. (Kelly Linehan/CP24)

The homicide unit is investigating the 'suspicious' death of a 91-year-old man near an Oakville retirement home on Saturday, Halton police say.

Emergency crews were called around 4:40 p.m. in the area of Church and Allan streets, north of Lakeshore Road East.

Police said they located a man on the sidewalk with obvious signs of trauma to the chest.

Paramedics performed lifesaving measures but police said he was pronounced dead at the scene.

"We're investigating the situation right now. We don't know the cause of his injury," Halton police Insp. Ivan L'Ortye told reporters at the scene.

Police are looking for a potential witness who might have been in the area when the incident happened.

He is described as male, black, between 30-40 years old, with an average build, and shoulder length black hair. He was wearing a black top, black pants, and possibly with reflective stripe.

Police said he was last seen in a newer model 4-door, dark-coloured Volkswagen Golf,  travelling southbound on Allan Street before turning right to westbound on Lakeshore.

"We would like to talk this person," said L'Ortye.

"There's no immediate threat to public safety within this area," said police.

Robin Ashwell who resides in the area told CP24 that he did not expect an incident like this would happen in their quiet neighbourhood.

Police are asking anyone who was in the area between 4:20 p.m. to 5:00 p.m. to contact them or Crime Stoppers.