TORONTO -- Police are looking for suspects after security cameras captured distraction thefts in North York and Vaughan, including one that targeted a 94-year-old man.

On Saturday after noon, the elderly man answered a knock at the front door of his home near Keele Street West and Highway 401.

His son, who only wants to be identified as Rocco, told CTV News a woman was standing on the front porch.

"She told my dad that her father wanted my dad to have this jewelry," Rocco said. "She lured him out of the front door of the house, and proceeded to put this jewelry on him, this necklace, and obviously took his real gold and abruptly left."

Security video shows the entire interaction lasts about 30 seconds before the woman gets into the passenger side of a white SUV and the vehicle takes off. 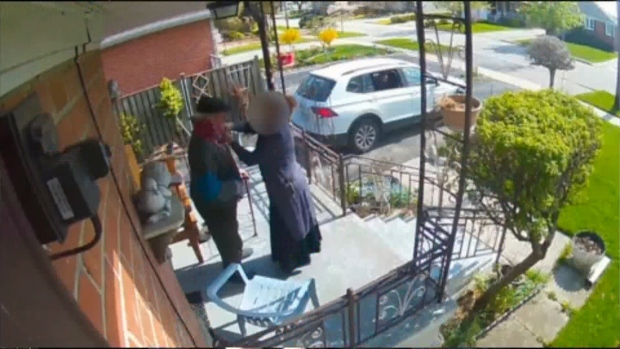 Rocco said the necklace that was stolen had pendants that were given to his father by his mother, who passed away in September.

"There was a cross, an emblem, faith and hope and charity," Rocco said. He said his father has been heartbroken since.

"He didn't sleep for the first two days. We just tried to settle him down and told that we'll deal with this."

They family posted the video on social media and another victim in Vaughan reached out with a similar experience from that same day.

The victim, who wanted to be identified as Kula, said he was in the front yard of his home near Teston Road and Jane Street at around 12:30 p.m. on May 16 when a white SUV pulled up. The driver asked for directions and got out of the vehicle.

"He just all of a sudden hug me. I didn't expect anything, maybe okay their tradition is like," Kula told CTV News Toronto. "Then he said I have a small gift for you. Before I said 'yes or no', he put it on my neck."

Kula said when he reached to check if his own gold chain was still around his neck, a woman asked him another question and he got distracted. He only realized after the suspects had taken off that his necklace was gone. 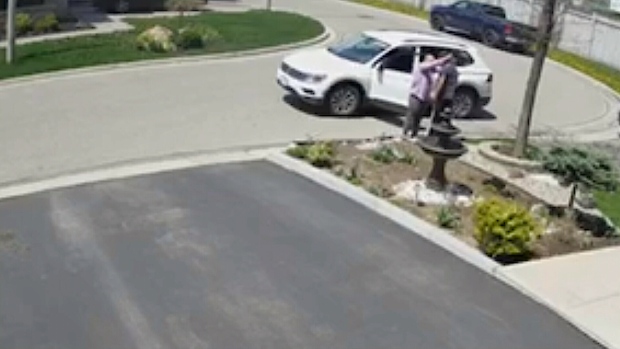 The victims’ families are also concerned that they came into close contact with strangers during the COVID-19 pandemic.

"I see this woman getting very close to my dad, no protective equipment or face mask on," Rocco said. "Here's this lady getting close to him and violating like that. I was just outraged."

Reports have been filed with Toronto Police and York Regional Police.

Constable Laura Nicolle with York Regional Police confirmed they are investigating the incident in Vaughan. The suspect vehicle is described as a white, newer model Volkswagen Touareg and there was a male driver and two female passengers.

York Regional Police is reminding citizens to be cautious and protect themselves by following these safety tips: