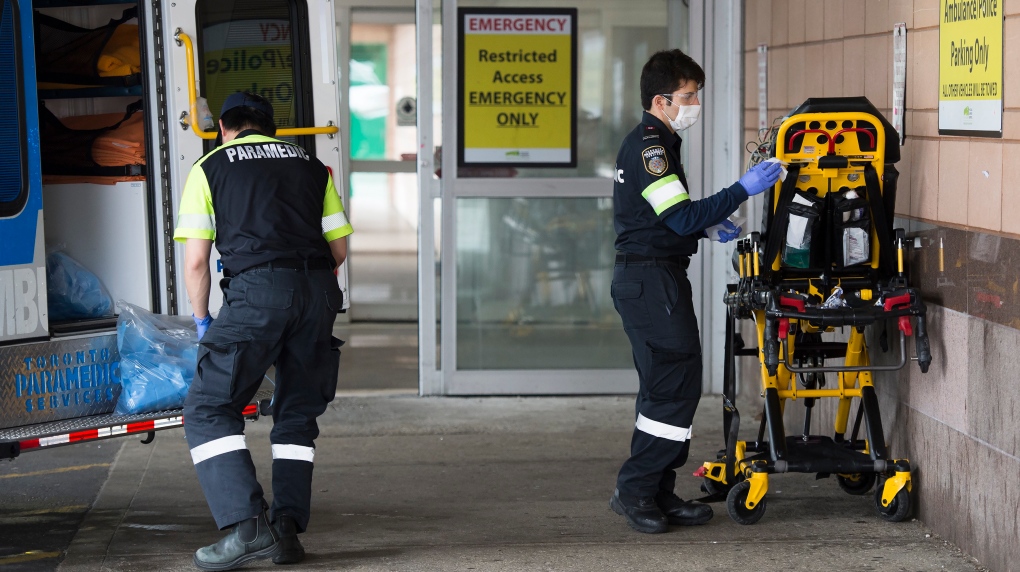 Paramedics disinfect medical equipment after transporting a patient to the emergency department at a hospital during the COVID-19 pandemic in Toronto on Thursday, April 30, 2020. (Nathan Denette/The Canadian Press)

TORONTO -- Advocates and legal experts are raising concerns about potential privacy violations in the emergency orders the Ontario government has implemented to help fight the COVID-19 pandemic.

The orders, which are currently in place until June 9 but will likely be extended further, allow first responders to access personal health details of residents who have tested positive for COVID-19.

The Progressive Conservative government says police, firefighters and paramedics need access to such information in order to protect themselves from contracting the virus while doing their jobs in the community.

But a group of advocates and public health workers say the orders are too broad and represent a significant privacy infringement.

They say first responders could make use of such data to target racialized and other marginalized communities.

They're calling for the Ontario government to either cut off access to such data or build a firm "sunset clause" into the orders to ensure the information can't be accessed in the future.

"We don't know how long police are going to have access to this data, what they're going to do to it," said Alexander McClelland, a criminology scholar and spokesperson for an advocacy group dubbed We Can't Police Our Way Out of a Pandemic.

"It's also just an unjustified, unprecedented violation of privacy rights."

Data access protocols are spelled out in section 120/20 of Ontario's Emergency Management and Civil Protection Act, which deals specifically with measures related to the COVID-19 pandemic.

Under that legislation, police, paramedics and firefighters are empowered to request personal information from labs or medical officers of health. The Act states that requesting parties would gain access to a person's name, address, date of birth, and COVID-19 test results.

A spokesman for Ontario Solicitor General Sylvia Jones said such information is only meant to help first responders "prevent, respond to, or alleviate the effects of the emergency.

"First responders put their lives on the line every day to protect Ontarians, and they are at great risk of being directly exposed to COVID-19 as they fulfil their front-line duties," Stephen Warner said in a statement. "That's why it's critical that we protect and support our front-line responders who are fighting to protect us from this virus every day."

Warner said the data will no longer be accessible once the emergency orders are revoked, but said it would be retained in accordance with provincial access to information laws.

McClelland dismissed the government's rationale as "a farce," noting front-line workers such as cleaners, cashiers and delivery workers are also at risk of contracting the virus but don't have the same access to information that's tightly guarded in more typical times.

"Why are the lives of police considered more valuable, thus allowing for the rights of all residents of Ontario to be violated?" he said. "Especially when police and first responders should already be operating using (personal protective equipment)?"

He said first responders may also be accessing testing information that's out of date, since government data does not identify when a person tested positive for the virus. Warner confirmed that the government does not distinguish between active and recovered cases.

McClelland said advocates have already learned of one instance in which a member of a racialized community had her privacy and human rights violated based on a COVID-19 diagnosis.

A message circulated to drivers working for the Toronto Transit Commission in mid-April urged drivers in the northwest corner of the city not to pick up a specific passenger, identified as both black and homeless. The message contained a physical description of the woman and said she had recently tested positive for COVID-19.

TTC Spokesman Stuart Green said the information shared in the message was provided by Toronto police, adding it "could have been worded more sensitively."

Police spokeswoman Meaghan Gray said the information provided to the TTC did not come from the provincial portal, but she did not offer further details. According to Gray, the force has never accessed the provincial data.

McClelland said the incident in Toronto clearly illustrates abuses that can result when sensitive data is made too widely available, adding other police forces have been up front about accessing the portal.

None of the other forces contacted by The Canadian Press responded to a request for comment.

McClelland's concerns are shared by Teresa Scassa, Canada Research Chair in information law and policy at the University of Ottawa.

Scassa said such personal details are rife for misuse in any context, adding the Ontario law should require first responders to prove they're requesting such details for a specific purpose related to the pandemic.

She said the government would be wise to consider striking a more appropriate balance between public health and privacy concerns, noting such matters will become increasingly important as the first wave of the outbreak wanes and contact tracing efforts ramp up.

"Trust is something that is really important in this context," she said. "It's worth being thoughtful about the balance."

This report by The Canadian Press was first published June 3, 2020.