TORONTO -- Homeowners in an Islington Village neighbourhood are hoping to spare dozens of old trees slated to be ripped down for a townhouse development.

Valerie Gibson has lived across the street from the site for 30 years, which is located near Burnhamthorpe Rd. and Dundas Street West in Etobicoke.

Gibson doesn’t understand after three years of fighting, why more than 40 trees should come down to make way for the project.

“I went into shock, total shock,” Gibson said. “[The trees] are heritage because most of them are over 100 years old. The tall pines are 120 years old.

Down the street, Chris Grant is stumped too. 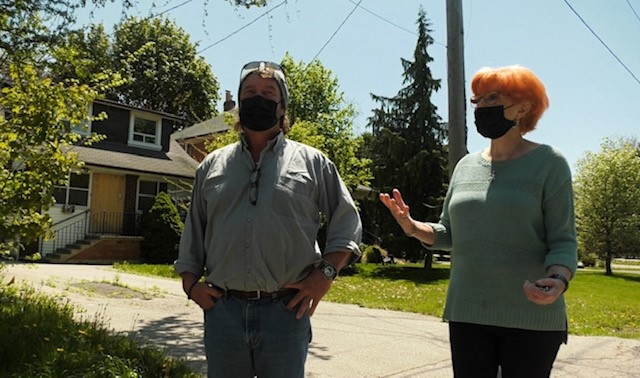 On top of time, he said he’s spent around $90,000 hiring a lawyer and planner because the project pushes into his quiet residential neighbourhood.

Some of his main concerns are traffic and a driveway for the complex.

Grant said it’s planned to go in just a couple homes away from where he lives.

“Kids play on this street,” Grant said. “The density, the height, and everything is massive. It’s too big to fit into a neighbourhood scheme.”

City staff had expressed concerns about an earlier larger version of the project.

Gibson and Grant said they thought having 140 residents attend a community consultation meeting in 2019 would make a difference.

But on May 11, the Land Planning Appeal Tribunal [LPAT] said it in it’s decision, “The tribunal has been satisfied and finds the proposal and its assembly of nine separate lots and the demolition required, as well as the use of the interior lot to be appropriate.”

Grant worries some of the townhomes will have penthouses and roof decks, towering over the single family homes nearby.

Grant and Gibson are hoping for a more modest development, which save some trees and be more in line with neighbourhood.

“In order to accommodate the proposed development, a number of protected trees (six City-owned and forty privately owned) would need to be removed,” said the LPAT decision.

However the decision also went on to cite one expert opinion saying that, “with respect to the street tree canopy, of the forty privately owned and protected trees slated for removal, he pointed out that the majority are coniferous, some of which are not long-lived.”

“I’m horrified. Totally horrified,” Gibson said. “I find it offensive the way the taxpayers of Toronto are being ignored by these tribunals.”

“You can do review panel of the decision, where that goes, no idea,” said Grant. “There are issues that are wrong.”

CTV News Toronto reached out to Distrikt, the company developing the site, but has yet to hear back.

“Staff are reviewing the decision and will determine what next steps the City will take,” the City of Toronto said in statement to CTV News Toronto.