Grandson found not criminally responsible in 2015 strangling death of grandmother 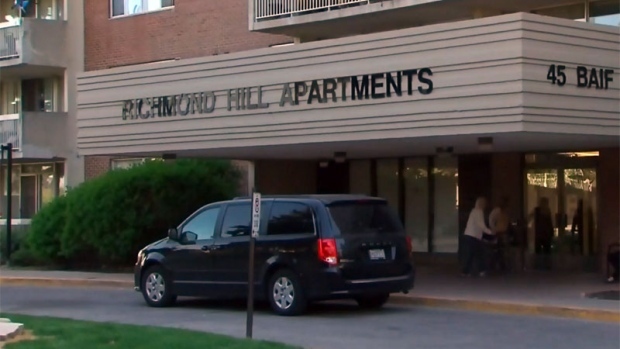 Police found the body of an elderly woman in a Richmond Hill apartment in 2015. (CTV News Toronto)

TORONTO -- A judge found a 28-year-old man not criminally responsible in the 2015 strangling death of his grandmother in her Richmond Hill apartment.

Justice Joe Di Luca found Thursday that Cameron Alexander Mossaddad likely suffered from schizophrenia and substance abuse issues on May 23, 2015, when he strangled Herma Parkes to death with his legs in the course of a struggle in her apartment bedroom.

The Crown argued Mossaddad knew the consequences of his actions because after killing Parkes, he went to a hospital to present nurses and doctors with wounds later found to be self-inflicted with a steak knife, claiming to police that his grandmother swung a knife at him and he acted in self-defence.

He was later arrested and charged with first-degree murder.

Court heard that Mossaddad began suffering from mental health issues years before the incident, which often led him to think his grandmother, who had made spaghetti for him the night she was killed, wanted to kill him.

In the months before Parkes’ death, Mossaddad travelled to Ottawa to seek asylum at various embassies because “someone was trying to kill him.”

He later told his adoptive mother that “certain rap musicians were communicating with him through their music.”

“I am satisfied on a balance of probabilities that at the time of the offence, Mr. Mossaddad was operating under a disease of the mind that rendered him incapable of understanding the moral wrongfulness of his actions,” Di Luca wrote in his written decision released Thursday.

Mossaddad will reside at Ontario Shores in Whitby under conditions that include supervised excursions outside the facility, drugs and alcohol ban and a weapons possession prohibition.

He will remain there until he is granted release by the Ontario Review Board.