A Grade 6 student has launched an online petition, calling on Premier Doug Ford to install rumble strips along the bend on Woodbine Avenue near Lake Shore Boulevard East, following a string of vehicle crashes in the area.

“We started realizing it was a huge issue after four crashes, because that’s a record, that’s a record in a year for crashes, and now it’s five,” 11-year-old Tristan Faulkner told CTV News Toronto.

“The speed limit around that bend is 40 km/h. My mom said these people are probably going 80 km/h,” he said.

“I think if someone is coming around this corner and they hear that very clear sound — it might actually make them sit up and think, ‘Oh, I better slow down here.’”

The Faulkner’s own car was struck by a vehicle in May. The blue Honda Accord was parked in front of their Woodbine Avenue home when they heard the sounds of a loud crash around 1:30 a.m. 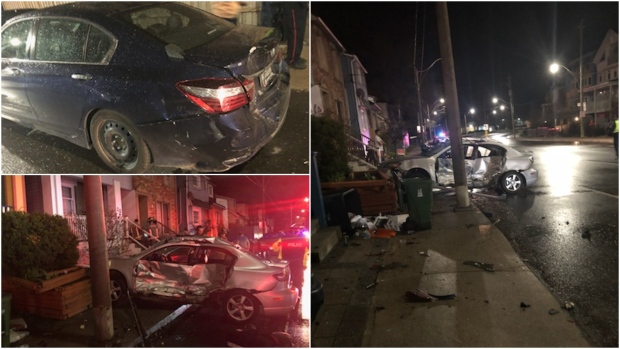 “My husband and I both leapt out of bed and ran downstairs, and sure enough, it was our car that was totalled, along with our neighbour’s car and another neighbour’s car.”

Tristan said his dad’s car, which was less than a year-and-a-half-old, was a complete write-off.

“They crashed into a car behind my dad’s car, hit my dad’s car. My dad’s car hit somebody else, it created a domino effect.”

While that was upsetting enough, Tristan said it was the continual crashes that prompted him to take action.

The Faulkners’ said they were promised a traffic study would be undertaken in January after the first crash this year. Erika said she was told that it would take nine to 12 months, but at this point, they have had no update.

Erika said her local councillor has brought the issue up at city hall, but the fact that this is a major arterial road has created another stumbling block.

“It’s under provincial jurisdiction. There’s a lot more restrictions, and as a result, really nothing is being done and we just keep seeing more and more accidents.”

The Faulkners’ said their greatest fear is that the next time there’s a crash along this stretch, it won’t just be property that’s damaged, but that someone will lose their life.