At around 6:15 p.m., Metrolinx said that all service was resuming across all lines, but advised customers to expect longer travel times, residual delays and some cancellations throughout the evening.

The protests have been set up in solidarity with the Wet’suwet’en hereditary chiefs in British Columbia, who are opposing a pipeline project and infringements on their territorial rights.

A number of people set up a blockade west of Aldershot GO Station on Monday night and had remained on the tracks throughout Tuesday, forcing Metrolinx to suspend GO train service between Hamilton and Aldershot stations and replace it with buses.

Police served the protesters with an injunction ordering them to leave on Tuesday morning but did not forcibly remove them from the premises.

At around 5:15 p.m., CP24’s cameras captured the protesters peacefully leaving the area in two large groups.

However their departure came about an hour after another blockade formed on the tracks near Lambton Arena, in the area of Dundas Street West and Scarlett Road. 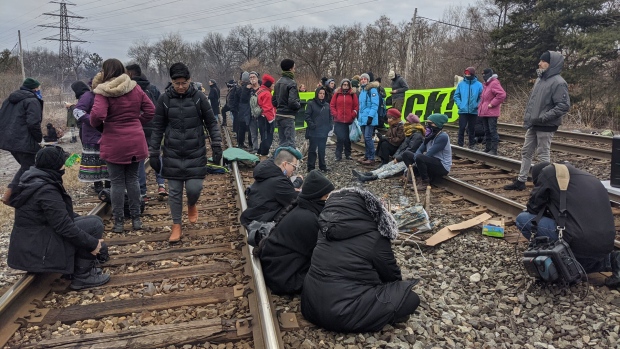 Service was completely suspended along GO Transit’s Milton line due to that blockade.

Police said that severl people have been arrested at the demonstration.

Metrolinx said that it was unable to provide buses to supplement service along the route because it does not have enough of them to carry the 20,000 commuters that utilize the line each night.

The agency later said that the resumption of service would not rely on buses, but would involve trains taking a longer route to make use of a detour.

As of 10 p.m., a large crowd was still at the site of the blockade, along with a large number of police officers.

“We are on scene to keep the peace and ensure public safety for all involved and limit disruption to critical infrastructure,” Toronto police said in a tweet.

Service was also suspended between Union and Pickering GO stations on the Lakeshore East Line for close to an hour due to a disruption near Guildwood. Service resumed on that line at around 5 p.m.

Commuter Update: Milton GO train service is resuming, a detour is in place. This is expected to take 30mins longer than normal. These trains trips will make all stops to Milton. We apologize for the delays and thank everyone for their patience. 1/2

She said that while trains are moving, some are moving very slowly, resulting in backlogs. Other trains also had to turn around and return to Union because of the protests, resulting in a surge of customers waiting to get home.

“There’s just congestion all throughout our corridor,” Aikins said. “It’s an extremely difficult situation for all involved. We’re doing the best we can.”

She advised customers to stay tuned to the latest updates.

Aikins said Metrolinx is planning for the possibility of further disruptions in the coming days.

“They are out of our control and we’re doing what we can to make sure everybody stays safe. That’s our first priority. We want you to stay safe around our tracks.”

The transit agency said late Tuesday that it is anticipating a normal morning commute for Wednesday morning, but warned that could change if there are circumstances beyond its control.