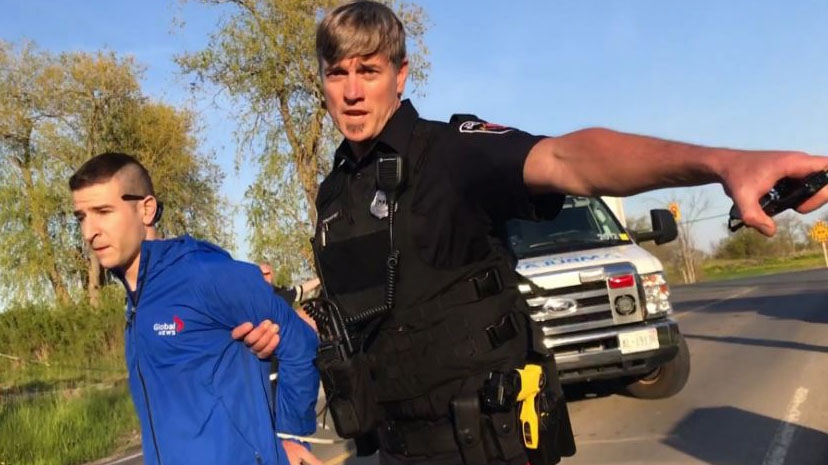 Hamilton police arrested freelance photographer David Ritchie and detained Global News cameraman Jeremy Cohn., left, around 8 p.m. at a scene where a 10-year-old girl was struck and killed by a van near her home. (Andrew Collins)

A Global News journalist who was briefly arrested while covering a fatal crash last year has filed a lawsuit against Hamilton police, alleging an officer used excessive force in an effort to prevent him from filming.

Jeremy Cohn says Hamilton police Const. Jeffrey Todoruck -- who is also targeted in the lawsuit -- breached his duty by forcefully arresting a clearly identified journalist who was acting peacefully.

He says the officer aimed to intimidate him in order to prevent him from reporting on the May 16 incident, which claimed the life of a 10-year-old girl.

In a statement of claim filed this week, Cohn further alleges the Hamilton Police Services Board failed to ensure officers were properly trained to deal with journalists and encouraged or permitted a culture of disrespect towards media, among other things.

The lawsuit seeks $700,000 in damages for negligence, false arrest, false imprisonment, assault, battery, mental suffering and breach of rights, as well as an additional $200,000 in punitive damages.

The allegations have not been proven in court and a statement of defence has not yet been filed.

Spokespeople for Hamilton police and the Hamilton Police Services Board said they do not comment on civil proceedings that may be before the courts.

The lawsuit alleges Cohn arrived on scene and learned that a freelance videographer had been arrested and was being held in a nearby police cruiser. The videographer, David Ritchie, appeared to be shaking and to have trouble breathing, the document says.

As he went to speak to Ritchie through the car's open window, Cohn was approached by a "hostile" Todoruck, who refused to explain why the videographer had been detained, the statement of claim says.

Cohn called the Hamilton police media relations officer on speakerphone so that Ritchie could hear, and discussed the situation. He was told to keep calm and go about doing his job, the document says.

The Global News reporter went to shoot footage of the scene, it said. At some point, officers set up police tape, though the lawsuit alleges this was more to keep media away, as residents were allowed inside the perimeter.

The statement of claim said Cohn was outside the tape the entire time. He made a second call to the media relations officer, who asked to speak with Ritchie, the document says.

But as Cohn approached the cruiser, Todoruck "violently grabbed Mr. Cohn by the arm and told him he was under arrest," the document says. "At no time did Const. Todoruck advise Mr. Cohn why he was being arrested."

Cohn was taken to a grassy area and pushed to the ground, causing his equipment to fall as well, the document alleges.

"Const. Todoruck pressed his knees into Mr. Cohn's back and then straddled Mr. Cohn with his full body weight, causing Mr. Cohn to experience significant pain and inability to move," it says, noting Cohn was not resisting arrest.

The journalist was then restrained with zip ties and held in a cruiser for 45 minutes before another officer released him without charges, it says.

The document says Cohn has suffered mental distress, humiliation and depression along with chronic pain. It also says the incident has interfered with his ability to do his job because he now feels distress in the presence of police officers.

Cohn says he has never received an apology or explanation from police despite filing a complaint with the force.