TORONTO -- The girlfriend of a Brampton, Ont. man killed in a hit-and-run earlier this month recalls the moment she realized person she loved was gone.

“When I heard his dad’s voice, I knew something was wrong. And then I thought, maybe he was going to tell me he was hurt or something. But he didn’t. He said dead. And that’s final. That means I never get to see him again,” Shannon Grant said.

Colin Fisher, 32, left Grant’s house on his bicycle at 11:40 p.m. on May 1. He should have reached his home around midnight. But at 12:05 am, a passing motorist found the Brampton man on Bovaird Drive, between Heritage Road and Mississauga Road, with life-threatening injuries.

Fisher was just minutes away from Grant’s home.

“I thought I was going to see him in a couple of hours. You never think that you’re not going to see somebody again,” Grant said. “You know, like they say that tomorrow’s not promised to you? That’s true. We talked about what we were going to do the next day, but Colin didn’t get a tomorrow.” 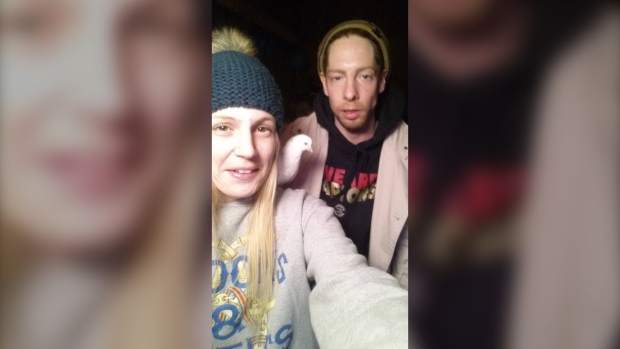 Police say investigators have surveillance video of the suspect vehicle, which has been described as a two-toned, 2004-2005 Ford F-150 pickup. Images show it moving through Caledon, along Highway 7, in Georgetown, and then heading Eastbound through Brampton on Bovaird Drive. The last time the vehicle was seen was at approximately 12:10 a.m.

“We know that there is some damage to this vehicle, so if anyone sees a vehicle that matches this description, or it’s in a body shop in the Greater Toronto Area or beyond, we are encouraging those people to contact our investigators,” said Peel Regional Police Const. Akhil Mooken.

Grant describes Fisher as her best friend, an avid outdoorsman, cyclist and skateboarder. She says he was planning to make a skateboarding video in the summer and had just begun selecting music for that video.

“But instead of him getting to make that, we had to pick songs for his funeral.”

Police have appealed to the driver of the pickup to speak to a lawyer and to make arrangements to turn themselves in. Grant echoed that appeal on Tuesday afternoon, on behalf of Fisher’s family.

“There are no words to describe the pain that they feel. That we all feel. So please, driver, come forward. Please. You need to do this. Please.”

Police are asking people in the area to check their surveillance and dashboard camera video to see if they captured any images of the Ford F-150 pickup, between 11 p.m. on May 1 and 1 a.m. May 2. Anyone with information is asked to contact the Major Collisions Bureau or Crime Stoppers anonymously.