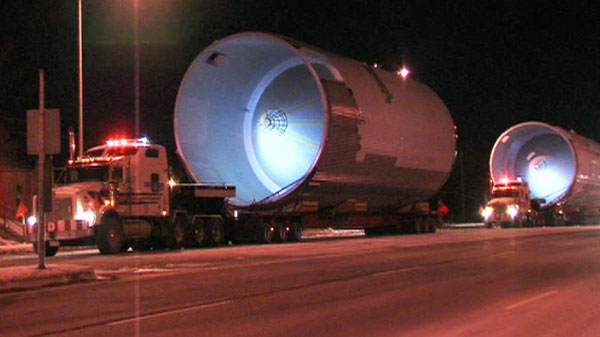 Two trucks in the beer vat convoy on a road in Halton region during the early-morning hours of Monday, Jan. 10, 2011.

TORONTO - The journey is almost over for a convoy of six massive beer vats destined for a Toronto brewery.

The vats are slated to arrive at the Molson Coors brewery near Pearson airport on Monday, nearly a week behind schedule.

The six fermentation tanks -- each capable of holding 1.4 million bottles of beer -- are parked for the day at Woodbine racetrack and will be back on the road tonight.

The convoy of about 40 vehicles left the Port of Hamilton on Jan. 7 and has been travelling overnight along secondary roads.

It was originally meant to arrive at the brewery on Jan. 11.

The vats' size mean utility crews must remove power and cable lines along the route and re-attach them after the convoy has passed.