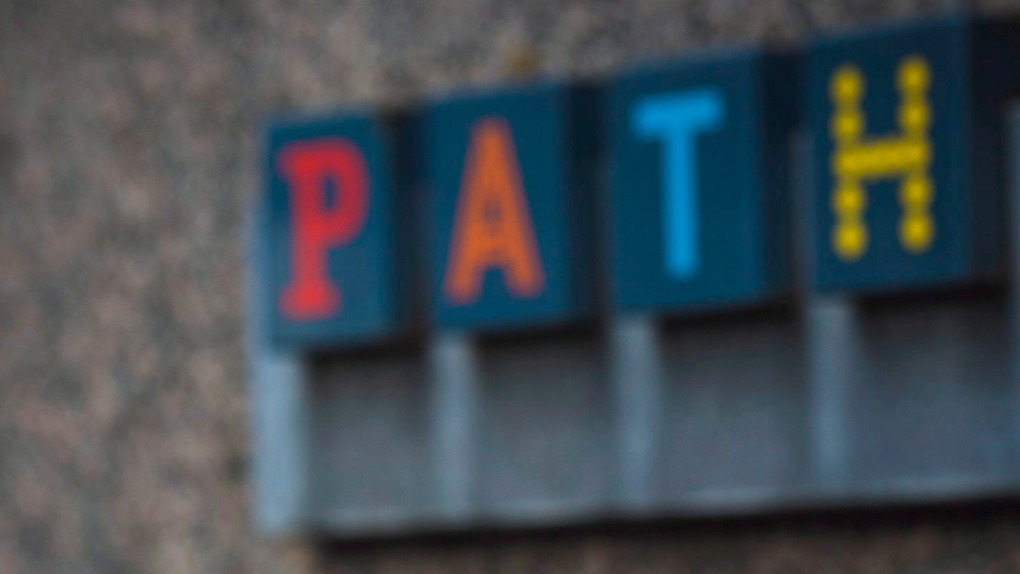 A sign for the PATH system is displayed in Toronto on Monday, July 9, 2018. THE CANADIAN PRESS/Tijana Martin

"We're down probably about 95 per cent," he said Tuesday during what would have been a busy lunch hour before the pandemic. "Not a great feeling."

Shimonov owns a Pumpernickel's sandwich restaurant in the tunnel network known as the PATH. The financial district employees and other office workers who frequented the route disappeared in March when the pandemic forced them to work from home. They have yet to return in their former numbers, though a handful of masked pedestrians were strolling through the space during lunch hour on Tuesday.

The 30-kilometre walkway connects 75 buildings, a handful of subway stations, hotels, tourist attractions and above-ground stores in a winding subterranean shopping centre that's home to 1,200 businesses, according to the City of Toronto. An estimated 4,600 workers make their living in the system.

Indoor pedestrian walkways that sprung up across North America over the last century offered an escape from the elements in weather-battered downtown cities. In Montreal, workers and shoppers have made use of the RESO, or Underground City, while the Winnipeg Walkway and Downtown Halifax Link offer their own connected tunnels and skywalks as refuge from the outdoors.

But as cases of COVID-19 continue to climb, these enclosed spaces have lost some of their lustre and their clientele.

In Shimonov's food court, just a few places are open for takeout -- chairs are stacked to deter customers from sitting, and the lights are off even at a McDonald's counter. But less competition doesn't mean much when there are no customers to serve, he said.

Underground businesses don't have the option of outdoor seating to attract guests who are wary of indoor dining. Without people stopping for lunch or placing catering orders for conferences and meetings, it's tough to make up for the lost sales.

Uncertainty hangs over many business owners and workers in the PATH.

Grant Humes, executive director of the Toronto Financial District BIA, said a short-term goal during the second wave of COVID-19 is to ensure small retailers are supported.

@"In the medium term, our job is to give workers confidence to come back to the office," Humes said in a written statement Wednesday.

He pointed to signage promoting mask-wearing and physical distancing. "Protocols are in place and I think office workers will be pleasantly surprised when they're down here and they see how organized it is."

Humes expressed confidence that workers will return to their towers eventually, driven by the convenience of downtown Toronto and the collaborative work environments that aren't possible with everyone working over Zoom.

But those waiting for their customer base to return have to get through at least another season.

In Winnipeg, about 25 per cent of workers in downtown Winnipeg have returned full-time to their offices and another 30 per cent are splitting time between home and office, according to a survey conducted by Probe Research for Downtown Winnipeg BIZ last month.

"That's a big shift when your primary customer base is downtown workers and less than 50 per cent are back full time," said Kate Fenske, CEO of the business improvement zone.

The drop in clientele comes at a time of the year when sales in the indoor pedestrian walkway pick up amid cooling temperatures.

"I think that's going to be a challenge this fall."

Fenske said her organization is working to promote health safety protocols in the pedestrian walkway and finding ways to make it easier for people to support local businesses - such as working with the city to offer free parking downtown.

Nikky Nikmanesh, manager at a Stitch It garment repair business in the PATH, said she misses the conversations with her customers after 16 years at the shop. Now, with many people's office clothes collecting dust during the long months of remote work, it's unpredictable whether even one person will stop in each day.

"We can't complain because this is for everywhere, everybody. We're just waiting," she said.

After 10 years working in the PATH, cleaner Nas Canalas said the silence in the usually bustling space over the last several months is hard to describe.

"Now, you can see this place, it looks like a ghost town," Canalas said, standing in a nearly empty food court Tuesday. "It's hard. This is the first time we've experienced this since we worked here."

He's starting to notice people trickling back in, but he said it's still a lonely, quiet work day in the nearly empty hallways where he and his coworkers are tasked with deep-cleaning every surface and door handle.

Canalas said he's grateful to have avoided a layoff so far in the pandemic, but uncertainty about when things will pick up again is tough on everyone.

"We are worried also because of our jobs."

This report by The Canadian Press was first published Oct. 15, 2020.

Ontario's COVID-19 cases in schools, child-care centres as of Nov. 25